Chasing a target of 203 needed a blazing start and veteran Shane Watson was up for a challenge, hitting 42 off 19 balls. 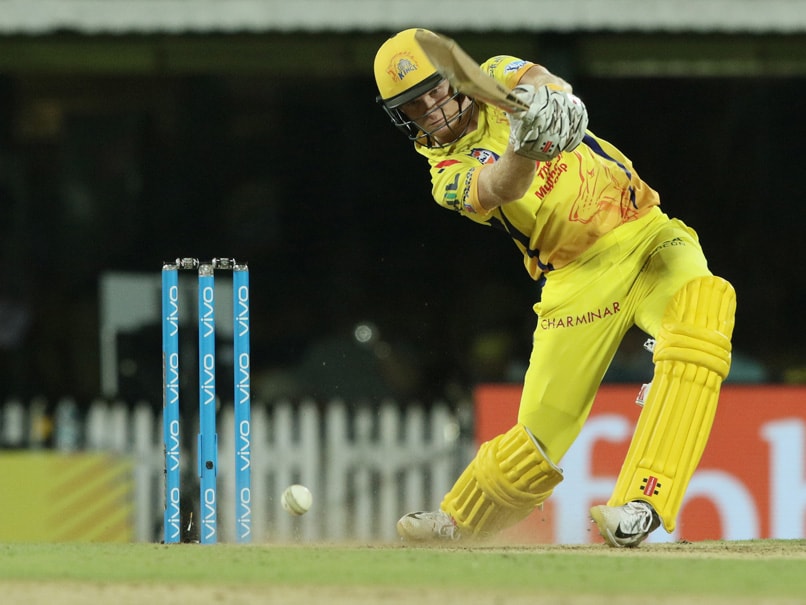 Sam Billings played a little gem as Chennai Super Kings once again pulled off a thrilling chase beating Kolkata Knight Riders by five wickets in an IPL encounter on Tuesday. Chasing a stiff target of 203, CSK won the match with a ball to spare as Ravindra Jadeja deposited military medium stuff from R Vinay Kumar into stands. The India discard bowled a forgettable final over where CSK needed 17 runs to win. This was after Englishman Billings set it up nicely with a magnificent 56 off 23 balls that five huge sixes apart from a couple of boundaries. The pressure put by Mahendra Singh Dhoni's slow batting (25 off 28 balls) was neutralised by Billings.

Chasing a target of 203 needed a blazing start and veteran Shane Watson was up for a challenge, hitting 42 off 19 balls with three fours and equal number of sixes in a 75-run opening stand with Ambati Rayudu (39 off 26 balls). Tom Curran making his IPL debut got rid of Watson with a short ball and Rayudu was accounted by Kuldeep Yadav as he tried an inside out shot.

Suresh Raina (14) sustained a calf muscle injury which hampered his running between the wickets with Sunil Narine sending him back. Dhoni and Billings got the chase back on track with a 54-run stand.

Earlier, Andre Russell hit an incredible 11 sixes in his 36-ball-88 as Kolkata Knight Riders scored a competitive 202 for six after being put into bat.

In one of the finest counter-attacking innings in recent editions of IPL, Russell came in at 89 for 5 and then took the bowling apart with as many as seven sixes being hit off West Indies teammate Dwayne Bravo, including three in an over.

Russell was involved in a 76-run sixth wicket partnership with skipper Dinesh Karthik (26) as KKR went onto post a good total. In fact, the last five overs yielded 79 runs that got KKR back into the match.

CSK captain MS Dhoni's strategy to use his slow bowlers in the initial stages on a surface aiding spin worked well but Russell had other ideas as he attacked the pacers including Shardul Thakur (1/37 in 4 overs) and Bravo (0/50 in 3 overs).

Bravo, who was frugal against Mumbai Indians in the first game, was taken for 50 runs in three overs with Russell hammering him all over the park, sending two balls out of the stadium.

Earlier, Sunil Narine got off to a flying start as he did in the game against RCB and smote Deepak Chahar for two big sixers on the leg-side in the first over of the match.

However, he fell off the first ball he faced from the experienced Harbhajan Singh (1/11 in 2 overs) in the second over, going for a big hit to be caught by Suresh Raina.

Chris Lynn, the dangerman, appeared to be getting into his groove and had hit four boundaries, before being castled by Ravindra Jadeja for 22.

Nitish Rana underlined his potential in his brief knock of 16 before an edge lobbed up to Dhoni. Robin Uthappa, who appeared in good touch, hitting three sixes in his 16-ball-29 was run-out as Raina's throw caught him short of his ground.

The talented young Rinku Singh didn't last long and fell to Shardul Thakur to leave KKR in a spot of bother at 89 for 5 in 10 overs.

Comments
Topics mentioned in this article
Kolkata Knight Riders Chennai Super Kings Chennai Super Kings vs Kolkata Knight Riders, Match 5 Indian Premier League 2018 Andre Russell Sam Billings Cricket
Get the latest updates on India vs Australia Series, check out the India vs Australia Schedule for 2020-21 and Ind vs Aus live score . Like us on Facebook or follow us on Twitter for more sports updates. You can also download the NDTV Cricket app for Android or iOS.