Yusuf Pathan pulled off a stunning one-handed catch at short third man that brought to an end Virat Kohli's stay at the crease. 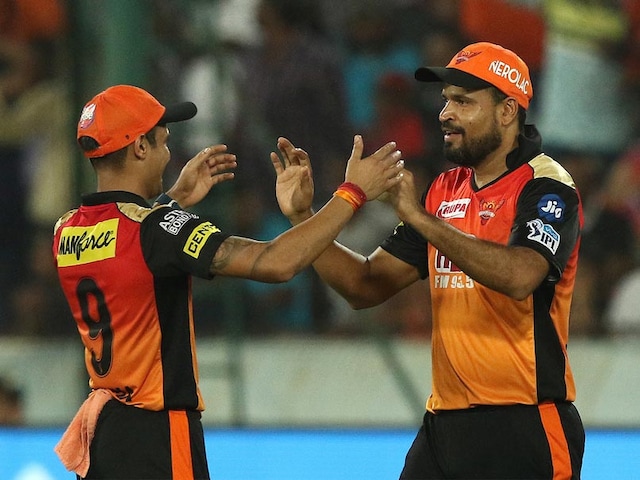 Yusuf Pathan was himself surprised with the catch that changed the match in SRH's favour.© BCCI

SunRisers Hyderabad (SRH) are making a habit of defending low totals and on Monday night, the Hyderabad franchise was at it again. The match was going to plan for Virat Kohli's Royal Challengers Bangalore (RCB) but SRH again decided to throw the script out of the window. Kane Williamson's side produced yet another sublime bowling performance to deny RCB a crucial win that gave the hosts an outright lead at the top of the IPL 2018 points table. The game-changer for SRH came via an unlikely source in the field -- Yusuf Pathan. Yusuf pulled off a stunning one-handed catch at short third-man to bring to an end to the RCB skipper's stay at the crease.

Kohli had already been dropped by Williamson at first slip off the bowling of Rashid Khan and it seemed SRH had let the match slip but Yusuf had other ideas.

Things were looking ominous for SRH with Kohli batting on 39 off 29 balls. Shakib-al Hasan was brought in to the attack despite being plundered for 15 runs by Kohli in his previous over.

The gamble, however, paid off for Williamson as Kohli tried to get after the Bangladesh spinner and in trying to hoick a length ball across the line, he spooned a catch to short third-man. For a fraction of a second it seemed that the ball would evade Yusuf and go over his head but the big man leaped, stuck out his right hand pulled a rabbit out of the hat.

Not just the bowler Shakib, but fans on Twitter were in disbelief at Yusuf Pathan's spectacular effort and among them was none other than Yusuf's younger brother Irfan Pathan, who compared the catch to plucking a mango out of a tree.

Haha. I can't decide what I enjoyed watched more, Yusuf's catch or his expression after it Super stuff Yusuf Bhai

That catch by Yusuf Pathan was. So. Brilliant. #SRHvRCB #VIVOIPL pic.twitter.com/4buO9DEG7I

Wow, what a catch that by Yusuf Pathan who was as surprised by the catch as we are #SRHvRCB #IPL2018 So, Virat Kohli falls again to a brilliant catch after looking unstoppable!

The win gave SunRisers Hyderabad a two-point lead over second-placed Chennai Super Kings and all but secured their place in the playoffs. SRH have now won 8 out of their 10 matches and have 16 points.

RCB meanwhile, are all but out of the running for a playoff spot. Kohli's team have six points from 10 matches and though they are not mathematically out, they will now have to rely on other teams to do them several favours.

Comments
Topics mentioned in this article
Sunrisers Hyderabad Royal Challengers Bangalore Yusuf Pathan Virat Kohli Kane Williamson Indian Premier League 2018 Cricket
Get the latest Cricket news, check out the India cricket schedule, Cricket live score . Like us on Facebook or follow us on Twitter for more sports updates. You can also download the NDTV Cricket app for Android or iOS.