Rashid Khan dedicated his man of the match award to those who lost their lives in a blast during a cricket game in his hometown earlier this month. 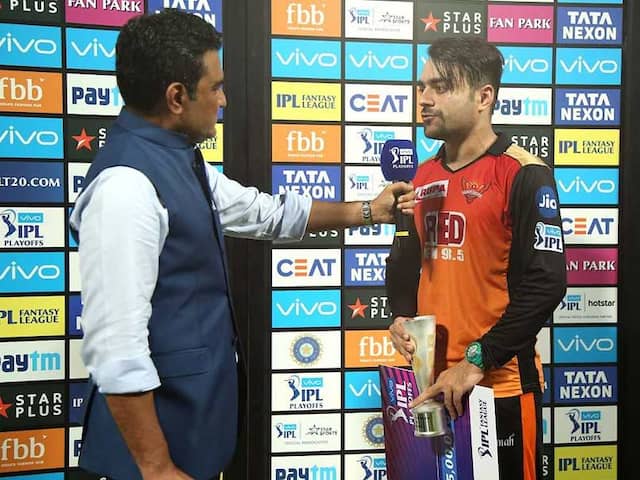 Rashid Khan won the Man of the Match award for a brilliant all-round showing for SRH vs KKR.© BCCI

Rashid Khan produced a stunning effort with both the bat and ball as SunRisers Hyderabad (SRH) beat Kolkata Knight Riders (KKR) by 14 runs to reach the IPL 2018 final where they will face MS Dhoni-led Chennai Super Kings (CSK). Rashid smashed a crucial 34 not out off just 10 balls and returned with figures of three for 19 in a brilliant all-round performance for SRH. The 19-year-old was given the Man of the Match award and during the post-match ceremony, Rashid Khan took the opportunity to dedicate his award to all those who lost their lives in a blast during a cricket game in Afghanistan earlier this month.

The attacks came in the home city of the world's no.1 ranked T20 bowler, Rashid Khan.

"I want to dedicate this award to those who lost their lives in a blast during a cricket game in my hometown back home," Rashid, 19, said at the post match presentation ceremony.

Rashid was the catalyst for SRH's 14-run victory over KKR in the IPL 2018 Qualifier 2.

The Afghan sensation helped struggling Hyderabad post 174 for seven by scoring bulk of the 50 runs in the last three overs which proved to be the difference in the end. He then returned to haunt KKR with the ball. Rashid registered figures of three for 19 in his allotted four overs, accounting for big guns Robin Uthappa, Chris Lynn and Andre Russell.

"It was much-needed for me, wanted to give my 100 percent in all departments," Rashid said on his performance.

"I just tried to pick the lengths, the focus was to play straight. That was the plan from the senior players. Fielding is one department where you can't make excuses, compared to last year, I've worked really hard in my fielding.

"If I can't contribute with bat or ball, I'm always looking forward to contribute on the field. Modern cricket demands that. I'm working hard on that," he signed off.

SRH will now face CSK in the IPL 2018 final at the Wankhede Stadium in Mumbai on Saturday night.

Comments
Topics mentioned in this article
Afghanistan Sunrisers Hyderabad Kolkata Knight Riders Rashid Khan Indian Premier League 2018 Cricket
Get the latest Cricket news, check out the India cricket schedule, Cricket live score . Like us on Facebook or follow us on Twitter for more sports updates. You can also download the NDTV Cricket app for Android or iOS.