IPL 2018, KXIP vs RCB: Virat Kohli (48 not out) and Parthiv Patel (40 not out) powered Royal Challengers Bangalore to a 10-wicket win against Kings XI Punjab 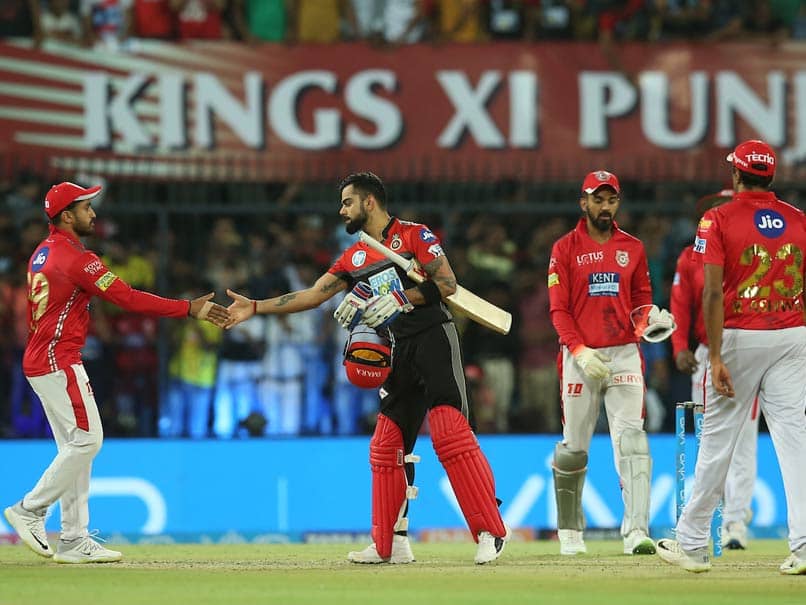 Royal Challengers Bangalore (RCB) captain Virat Kohli remained unbeaten on 48 as he powered RCB to a 10-wicket win over Kings XI Punjab (KXIP) in an Indian Premier League clash at the Holkar Stadium, Indore on Monday night. Kohli was ably supported by Parthiv Patel, who also remained unbeaten on 40. RCB winning the toss put KXIP into bat as the visitors produced a disciplined bowling performance to bundle out the home team for a meagre 88 in just 15.1 overs. In reply, Kohli led from the front as RCB chased down the target in 8.1 overs. During his innings, Kohli hit six fours and two sixes, while Parthiv's innings was laced with seven boundaries. Courtesy this win, RCB improved upon their net run rate and are placed seventh with 10 points, while KXIP are placed fifth with 12 points after crashing to their third successive defeat.

Sent into bat, Kings XI innings never got going as they lost wickets like pack of cards from the onset to be bowled out in 15.1 overs. Backed by some good fielding, Umesh Yadav (3/23) came up with an impressive bowling effort up front to destabilise the Kings XI innings. Besides, Yadav, Yuzvendra Chahal (1/6), Colin de Grandhomme (1/8), Moeen Ali (1/13) and Mohammed Siraj (1/17) picked up a wicket each.

Aaron Finch top-scored for Kings XI with a 23-ball 26 while KL Rahul made 21 up the order. RCB bowlers were very well complemented by some good outfield catching and three runs outs. Kings XI witnessed a terrible start to their innings after being sent into bat as they lost four wickets with the scoreboard reading just 50 in 6.5 overs.

Rahul gave Kings XI a brisk start with a 15-ball 21 in the company of Chris Gayle (18) before Yadav struck twin blows in the fifth over, dismissing both the openers.

To make matters worse for Kings XI, Karun Nair edged a delivery straight to RCB skipper Kohli at the lone slip in the next over. Wickets kept on tumbling for Kings XI as Marcus Stoinis and Mayank Agarwal too perished when their team needed them the most. While Stoinis was cleaned up by Chahal, Agarwal got a faint edge to a de Grandhomme delivery in the leg side and Patel did the rest behind the stumps.

From there on, Kings XI never really recovered and were eventually bundled out for the second lowest total of this years IPL, courtesy some brilliant work at the field by RCB fielders.

Comments
Topics mentioned in this article
Royal Challengers Bangalore Kings XI Punjab Virat Kohli Indian Premier League 2018 Cricket
Get the latest updates on India vs England Series, India vs England , live score and IPL 2021 Auction . Like us on Facebook or follow us on Twitter for more sports updates. You can also download the NDTV Cricket app for Android or iOS.