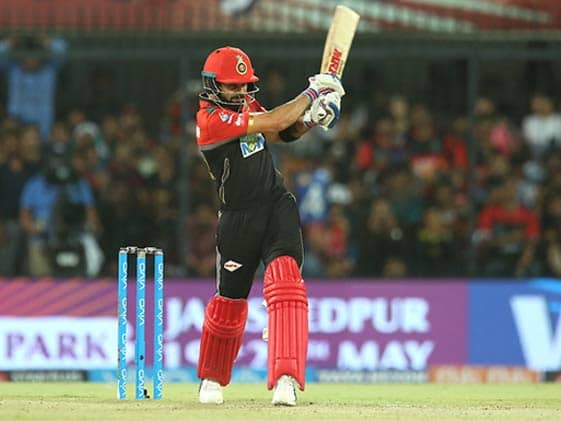 KXIP vs RCB highlights: The match was played at the Holkar Cricket Stadium© BCCI

After bundling out Kings XI for paltry 88, RCB chased down the target with consummate ease, reaching 92 for no loss in 8.1 overs. Skipper Virat Kohli led from the front with the bat with an unbeaten 48 while Parthiv Patel made unbeaten 40 to help RCB romp home. Kohli struck six fours and two towering sixes during his 28-ball unbeaten knock, while Parthiv's innings was laced with seven boundaries. While Kings XI slumped to their third successive loss, RCB improved upon their net run rate by sealing the victory in 8.1 overs. RCB now have 10 points from 12 games, same as Kings XI with two games remaining for the both teams. (Scorecard)

Sent into bat, Kings XI innings never got going as they lost wickets like pack of cards from the onset to be bowled out in 15.1 overs.    Backed by some good fielding, Umesh Yadav (3/23) came up with an impressive bowling effort up front to destabilise the Kings XI innings.    Besides, Yadav, Yuzvendra Chahal (1/6), Colin de Grandhomme (1/8), Moeen Ali (1/13) and Mohammed Siraj (1/17) picked up a wicket each. Aaron Finch top-scored for Kings XI with a 23-ball 26 while KL Rahul made 21 up the order. RCB bowlers were very well complemented by some good outfield catching and three runs outs. Kings XI witnessed a terrible start to their innings after being sent into bat as they lost four wickets with the scoreboard reading just 50 in 6.5 overs.

Rahul gave Kings XI a brisk start with a 15-ball 21 in the company of Chris Gayle (18) before Yadav struck twin blows in the fifth over, dismissing both the openers. While Rahul pulled one straight to de Grandhomme a deep square leg, Gayle departed in similar fashion caught by Siraj off another short delivery three balls later. To make matters worse for Kings XI, Karun Nair edged a delivery straight to RCB skipper Kohli at the lone slip in the next over.    Wickets kept on tumbling for Kings XI as Marcus Stoinis and Mayank Agarwal too perished when their team needed them the most.    While Stoinis was cleaned up by Chahal, Agarwal got a faint edge to a de Grandhomme delivery in the leg side and Patel did the rest behind the stumps.

From there on, Kings XI never really recovered and were eventually bundled out for the second lowest total of this years IPL, courtesy some brilliant work at the field by RCB fielders.

22:28 IST: A quick look at the points table after this match.

A quick look at the #VIVOIPL Points Table after Match 48 in Indore. pic.twitter.com/rx9zVDmTz0

A one sided affair here in Indore as the @RCBTweets chase down 89 runs in 8.1 overs.

They beat #KXIP by 10 wickets. pic.twitter.com/M0vtcy6O0t

22:24 IST Four! Short delivery from Rajpoot and Kohli hits it for boundary to see RCB home.

22:22 IST: Four! Shortish length outside off, Parthiv waits and provides a ramp wide of Rahul, behind the stumps.

22:13 IST: Four! Short and wide from Marcus Stoinis, Kohli stands tall and guides the ball through the point for a boundary. Absolutely beautiful from the RCB captain.

22:10 IST: Six! Full and wide from Andrew Tye, Kohli makes room, frees his arms and clubs Tye for a flat maximum towards the deep extra cover.

22:06 IST: Four! Parthiv hits consecutive boundaries off Mohit Sharma to end the over in style. First he guides the slower short delivery past the man at short fine and then pulls the second short delivery powerfully as it beats the man at the boundary.

22:02 IST: Four! Full and wide from Mohit Sharma, Parthiv says thank you and slams the ball through the covers for a boundary. Timing on that shot was impeccable. "Glorious," says Ian Bishop on air.

21:59 IST: Close! Andre Tye appeals for a Kohli LBW but the on-field umpires turns down the appeal. KXIP go for the DRS and the replay shows the ball was missing the leg stump. Kohli survives!

An LBW decision against Virat was reviewed by Ashwin but replays clearly showed that it was missing the stumps.#RCB 39/0, 4 overs.#PlayBold #KXIPvRCB

21:52 IST: Four! Good length delivery from Rajpoot, Kohli backs away and slices the ball through point for a boundary.

21:50 IST: Four! Short from Rajpoot and Kohli pulls it away with authority for a boundary. 10 runs in the first two balls.

21:49 IST: Six! Ankit Rajpoot, the new bowler in, gets welcomed to the crease with a maximum. Rajpoot bowls full and in Kohli's arc as he smacks the ball over the infield for a maximum.

21:47 IST: Four! Consecutive boundaries for Parthiv off Andrew Tye. First he flicks the length ball past the man at short fine for a boundary and then caresses the drive through the covers for a boundary. That shot couldn't have been any better,

21:43 IST: Four! Short delivery from Ashwin to end the first over and Parthiv Patel rocks back and pulls the ball through the mid-wicket for a boundary. Royal Challengers Bangalore 9/0 after the first over.

21:22 IST: Run-Out! Axar worked the flatter delivery towards wide long-on and takes a single but seeing Rajpoot charge across, he went for the second. Rajpoot at the dangers end did not drag his bat in as Moeen Ali takes off the bails in a flash.

21:12 IST: OUT! Another one bites the dust. Mohit Sharma is run-out only for three runs. Kings XI Punjab have lost their plot completely. KXIP 84/9 in 14 overs.

21:05 IST: OUT! Short deliveries from Umesh Yadav have been effective tonight. Andrew Tye, the new man in, looking to pull, misses and Parthiv completes the catch behind the stumps.

21:02 IST: Run-Out! Ashwin, the Punjab captain, departs on the very first ball. Ashwin works the ball on the off-side for a single, he sets off but gets sent back by Axar. Ashwin fails to make the ground as Parthiv takes off the bails in a flash.

21:00 IST: OUT! Moeen Ali strikes as Finch departs in search of quick runs. Ali dragged back the length a bit, Finch pulls only for the fielder in the deep to take a good catch. KXIP are in real trouble now.

20:57 IST: Six! Aaron Finch is fighting the lone battle here. Short delivery from Moeen Ali and Finch clubs him for a maximum towards the deep mid-wicket region.

20:53 IST: RCB bowlers have been on point today as they are not letting the Punjab batsmen to free their arms. The boundaries have been dried up.

20:44 IST: OUT! Mayank Agarwal departs cheaply as Colin de Grandhomme gets his first wicket. The bowler strays on the leg side, Mayank attempts the glance, misses and the keeper appeals for a caught-behind. The umpires go upstairs and UltraEdge shows that the ball had brushed the bat.

.@mayankcricket knicks a delivery bowled down the leg-side by Colin de Grandhomme and it just carries to Parthiv Patel.

He is gone for

20:38 IST: Six! Siraj bowls a full delivery, Finch makes room and slams the ball over the covers for a maximum. Finch needs to perform today for his team.

Strongman @y_umesh on here in Indore.

The hosts in a spot of apple crumble drama.#KXIPvRCB pic.twitter.com/azIWu0Qqov

20:33 IST: OUT! Yuzvendra Chahal gets into the action as he removes Marcus Stoinis cheaply. Chahal bowls a googly, Stoinis fails to read it, the wickets are all over the place. Virat Kohli is fired up!

20:28 IST: Four! Finch gets off the mark in style as he drives the length ball through the cover for a brilliant boundary.

20:26 IST: OUT! Siraj bowls an away going short of length delivery, Karun Nair looking to poke at the ball gets an outside edge and Kohli at the slips takes a regulation catch. Three quick wickets have put KXIP on the back foot now.

20:24 IST: OUT! The short ball does the trick yet again. Gayle pulls Umesh high up in the sky and Siraj at deep fine leg takes a brilliant catch as Gayle departs for 18. Umesh has been magnificent so far in the tournament.

20:23 IST: Four! Full and wide from Umesh Yadav and Gayle crunches it through the cover for a boundary.

20:20 IST: OUT! Umesh Yadav bangs the ball in short and Rahul pulls the ball flat to the man at deep square leg. Colin de Grandhomme takes a good catch to send KL Rahul back to the hut.

20:17 IST: Four! Gayle has opened up now. Firstly, he pulled the short delivery powerfully for a on-bounce boundary and then lifts the full delivery over the fielder at mid-off for a boundary. Kings XI Punjab 28/0 after four overs.

20:14 IST: Four! Southee bowls short and wide and Gayle makes room, frees his arms and pummels the ball through the cover for his first boundary of the night.

20:12 IST: Six! Umesh Yadav goes short and gets punished as Rahul pounces on it. The batsman stayed back and hammered the pull over deep fine leg for a maximum. You can not be bowling half-trackers to Rahul.

20:08 IST: Six! Southee after a quiet few deliveries gets hit for a maximum. Rahul gets into position early and pulls Southee a for maximum over backward square leg for a boundary.

20:04 IST: Royal Challengers Bangalore 1/0 after the first over.

Great 1st over from Umesh. Unfortunate to give Gayle a life. How costly will it prove?

20:03 IST: DROPPED! Back of a length delivery from Umesh Yadav caught Gayle off guard. The ball angles away and takes a thick outside edge of Gayle's bat as Parthiv Patel behind the stumps, dives to his left, but spills the ball. Gayle survives.

20:00 IST: First ball -- Umesh Yadav starts with a back of a length delivery that swings in and cramps Rahul for a space.

19:45 IST: Ashish Nehra and Yuvraj Singh greeting each other.

19:20 IST: Virat Kohli's wife Anushka Sharma pepping up RCB before the start of the match.

It's game time here in Indore where the @lionsdenkxip are all set to take on the @RCBTweets.#KXIPvRCB pic.twitter.com/Ritfiw8UTy

19:00 IST: Hello and welcome to the live blog of the match between Kings XI Punjab and Royal Challengers Bangalore straight from Indore.

De Villiers (358 runs) is 108 runs behind his skipper, although he has played two games less. Mandeep Singh (245 from 11 games) is third in the list and is another 200 runs (221 runs) behind Kohli. For KXIP, Rahul has been in a different league with five half-centuries and a strike-rate of 162 plus and an average of nearly 60. Rahul will be desperate to get some support from Gayle, who has gone quiet after initial carnage. A quickfire 50 from Gayle can change the complexion of the game.

However, it is the bowling which has let both RCB and KXIP down on many occasions. For KXIP, the standout bowler has been Andrew Tye with 20 wickets at an economy rate of 8 per over while teenage mystery spinner Mujeeb ur Rahman has been exceptional with 14 wickets at an economy rate of of 6.99 per over. The problem area has been skipper Ravichandran Ashwin's inability to get breakthroughs with only six scalps from 11 games at 8.13 runs per over.