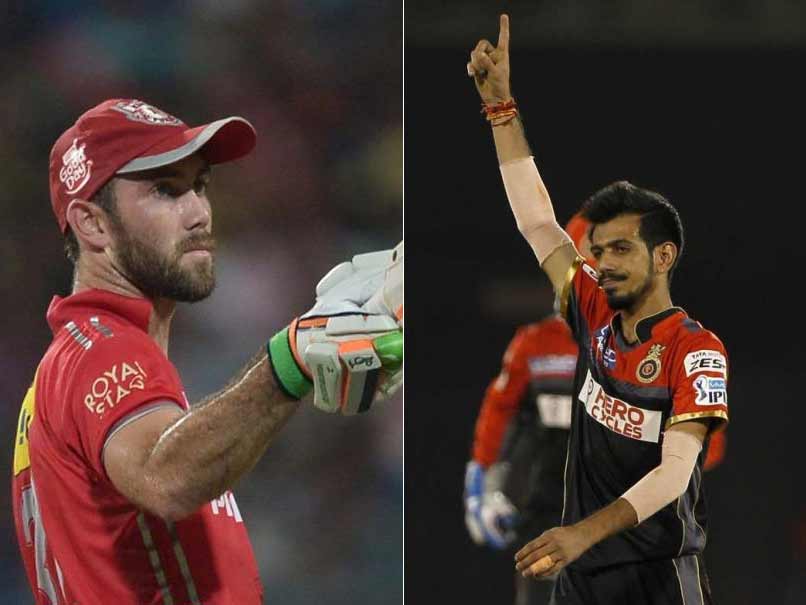 Glenn Maxwell and Yuzvendra Chahal could be key when KXIP and RCB face each other in Indore.© BCCI

Kings XI Punjab and Royal Challengers Bangalore have both registered wins this Indian Premier League season and will be looking for their second victory when the two teams clash at the Holkar Cricket Stadium in Indore on Monday. Punjab beat Rising Pune Supergiant in the only game they have played in the IPL 2017 season while RCB, after losing their opening match to Sunrisers Hyderabad, outclassed Delhi Daredevils in their second to register their first point in the 10th edition. The two Australian captains - Glenn Maxwell of KXIP and Shane Watson of RCB - would be keen to emerge winners. We suggest five names that should make a big impact on the game.

Top 5 picks for the KXIP vs RCB game

Glenn Maxwell: The Punjab captain proved why he is rated so highly in the T20 format with awesome destructive batting against Rising Pune Supergiant. Maxwell smashed an unbeaten 44 off just 20 balls to take his side to a convincing win. The Australian right-hander might not put in consistent performances over the entirety of the tournament but on his day, he is one of the most destructive players going around in international cricket.

Axar Patel: Axar too showed his prowess in the shortest format of the game by chipping in both with the bat and the ball. He was sent ahead of David Miller and Maxwell to negate the threat posed by Pune's Imran Tahir and did the job well. But Axar can get you some big points not just because he chips in with the wickets but also because he is an extremely economical bowler. The left-arm spinner gave away just 27 off his fours (6.75 economy rate) when most of the other Punjab bowlers went for above eight runs per over.

Chris Gayle: The big Jamaican failed to fire in the first match but then he has never been known for his consistency. Gayle's ability to score big runs at a superfast rate is what makes him invaluable and leaving him out of your Fantasy League team could cost you dear. An unmatched strike-rate and ability to keep peppering the boundaries makes him a standout performer.

Tymal Mills: England's T20 specialist Tymal Mills might not have yet made the sort of big impact that many expected him to, however, he has taken wickets in both games so far and bowling at the death, managed to keep batsmen under tabs. The left-arm pacer is used majorly in the back-end of the innings but his slower balls have made him almost impossible to hit.

Yuzvendra Chahal: The India leg-spinner is by far the most economical leg-spinner going around in the world today. His past IPL and domestic performances got him a place in the Indian team against England in the T20 series. After impressing there, he seems to be going from strength to strength. He had figures of 1/22 at an economy rate of 5.50 in RCB's loss against Sunrisers -- a match where Hyderabad scored more than 200 runs. In the second, match he did even better, giving away just 19 runs off his 4 overs and taking one wicket.

Virat Kohli and AB de Villiers's participation is still under cloud and it is unlikely that the Indian skipper would be risked unless and until he is well and truly fit.

Punjab have a string of international batting stars but it is unlikely that they will tinker with a winning combination.

Comments
Topics mentioned in this article
Kings XI Punjab Royal Challengers Bangalore Glenn Maxwell Yuzvendra Chahal Tymal Mills Shane Watson Axar Patel Chris Gayle IPL 2017 Cricket
Get the latest updates on IND vs NZ 2021, check out the Schedule and Live Score . Like us on Facebook or follow us on Twitter for more sports updates. You can also download the NDTV Cricket app for Android or iOS.