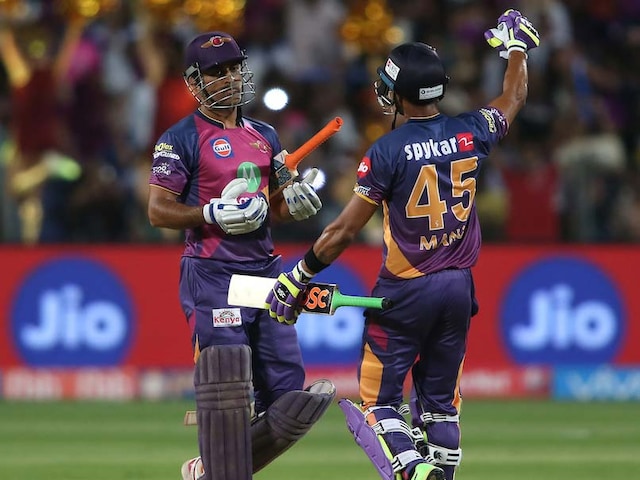 Mahendra Singh Dhoni smashed an unbeaten 61 to finally come good and reassert his top-class finisher tag as he guided Rising Pune Supergiant to a six- wicket victory over defending champions Sunrisers Hyderabad in a thrilling IPL match on Saturday. After a series of flop shows, Dhoni's reputation as a top-notch finisher was at stake, but today the former India captain was in his elements, smashing a flurry of fours and sixes as Pune overhauled the target of 177 in the final ball of the run chase. Dhoni needed two runs from the final delivery but he hit Siddarth Kaul for a boundary as Pune reached 179 for 4 to the wild celebrations of the home supporters at the MCA Stadium.

Ms Dhoni does what he's done with so much confidence over the years. What a champion knock. Great to watch 💪

Dhoni faced 34 deliveries for his unbeaten 61 that included five fours and three sixes.

This was the third win for Pune from six matches and they now have six points.

Hyderabad, on the other hand, have eight points from seven matches, after four wins and three losses.

Opener Rahul Tripathi had kept Pune in the hunt with a 41-ball 59 before he was out in the 14th over. Captain Steve Smith contributed with a 21-ball 27 but he got out early in the 11th over.

When Dhoni came out at number four at the fall of Smith's wicket in the final delivery of the 11th over at 87 for 2, Pune needed 10 runs an over to win the match.

However, the situation worsened after Tripathi was out.

Ben Stokes (10), this IPL season's costliest buy, once again failed to contribute, falling in the 17th over and by that time the asking rate had shot up to above 14 an over.

Dhoni, who seemed to be struggling as he could not connect his bat with the ball for some time, then swung into action as he hit two fours and a six to take 17 runs from the 18th over bowled by Mohammed Siraj.

Dhoni was on song then and he did not spare death overs specialist Bhuvneshwar Kumar, stealing 19 runs from the penultimate over with the help of two fours and a six. That changed the complexion of the match and Pune needed 11 runs from the final over.

What a pleasure watching @msdhoni operate like that! I see @KagisoRabada25 's making his debut for the @DelhiDaredevils tonight-exciting!

Manoj Tiwary (17 not out) was dropped in the first ball of the final over and got a four courtesy Rashid Khan. But Tiwary and Dhoni could score only in singles in the next three deliveries before a couple of runs in the penultimate ball.

Pune needed two from the last ball and Dhoni hit a four to seal the issue.

Earlier, Pune produced a disciplined bowling effort before a smashing half-century by Moises Henriques enabled Hyderabad to reach a competitive 176 for three.

Put into bat, Hyderabad were struggling at 122 for three in the 16th over before Henriques (55 not out) increased the tempo to steal 54 runs in the last four overs, in the able company of Deepak Hooda (19 not out off 10 balls).

Off to a decent start after being put in to bat, skipper David Warner and Shikhar Dhawan put on a 55-run stand for the opening wicket before Hyderabad bowlers led by Daniel Christian (1/20) and Imran Tahir (1/23) dominated the middle overs to put brakes on the scoring.

Tahir was the one, who gave Hyderabad their first breakthrough by seeing off Dhawan for a 29-ball 30.

Kane Williamson tried to accelerate the run-rate during his 21 off 14 balls that included a six and a four, he was trapped leg-before wicket by Christian.

Even though Warner held on to his wicket and played a responsible knock, he failed to up the ante.

Eventually, he was bowled out by Jaydev Unadkat for 43 off 40 deliveries, studded with three boundaries and a six.

After Warner's departure, Henriques launched a furious assault, hitting two sixes and six boundaries to guide the team to a 175-plus total.

He remained unbeaten on 55 off just 28 deliveries.

Comments
Topics mentioned in this article
Rising Pune Supergiant Sunrisers Hyderabad MS Dhoni David Warner Maharashtra Cricket Association Stadium, Pune IPL 2017 Cricket
Get the latest updates on IPL 2020, check out the IPL Schedule for 2020 and Indian Premier League (IPL) Cricket live score . Like us on Facebook or follow us on Twitter for more sports updates. You can also download the NDTV Cricket app for Android or iOS.