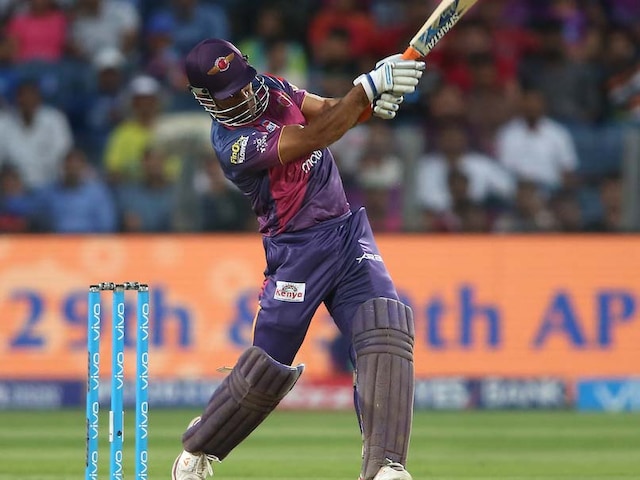 Rising Pune Supergiant (RPS) beat Sunrisers Hyderabad (SRH) by six wickets in the Indian Premier League (IPL) in Pune on Saturday. Heroics from Rahul Tripathi (59) and MS Dhoni helped Pune overhaul the total of 177 to register their third win of the season. Coming to play almost after a week RPS showed great composure and focus against Sunrisers Hyderabad. Dhoni thrashed Bhunveshwar Kumar and Mohammed Siraj in the most important over, which did the trick for the home team. Rashid Khan, for Sunrisers Hyderabad, displayed bowling figures of one for 17 from his four overs. MS Dhoni was adjudged the Man of the Match for his unbeaten 61 off 34 balls. (SCORECARD)

Catch live cricket action and updates of RPS VS SRH in Pune, here:

19:25 IST: Four off the first ball of the last over. Manoj Tiwary gets a life as Rashid Khan drops the catch on the boundary line.

19:21 IST: Six! Dhoni brings up his fifty with the helicopter shot.

19:19 IST: Four! The ball falling a bit short, Dhoni swings it for a boundary on the square leg boundary.

19:14 IST: Six! Siraj being taking to the cleaners, Dhoni flat bats the ball for a maximum.

19:13 IST: Four! Shuffles, gets in line and Tiwary plunges the ball for a boundary at fine leg boundary.

19:11 IST: Four off the last ball of the Bhuvneshwar over, Manoj Tiwary gets into the act of scoring runs. Pune need 47 in 18 balls.

19:03 IST: Out! Bhuvi strikes for SRH. Ben Stokes flicks the ball right into the hands of the substitute fielder Shankar. Pune now 121 for four.

18:55 IST: Six! Flat hits Kaul for a maximum, Dhoni looking to free his arms with five overs to go.

18:50 IST: Two new batsmen for RPS at the crease, things look difficult for RPS as SRH continues to takes wickets at regular intervals.

18:49 IST: Out! Lovely piece of fielding from Rashid Khan, direct hit on the stumps.

18:42 IST: Four! Dhoni cuts Siraj with authority for a boundary.

18:34 IST: Wicket for SRH! Trying to cut Rahisd Khan, Smith drags the ball onto the stumps. RPS 87 for two.

18:31 IST: Back-to-back sixes from Steven Smith! Getting into the flow of scoring runs.

18:28 IST: Four! There is no stopping Tripathi, smart cricket from the youngster.

18:19 IST: Good over from Rashid Khan, concedes only three run from his first.

18:14 IST: Four! Extra Cover this time, Tripathi picking up his spot with ease.

18:12 IST: Six! Down the track and smacks Kaul with a straight bat.

18:08 IST: Four! Tripathi unhindered by the dropped catch, continues to strikes the ball.

​18:07 IST: Six! Short from Siraj and Tripathi crunches it for a maximum.

18:06 IST: Dropped! Bipul Sharma misses the catch of Tripathi as he lives on.

18:05 IST: Four! Steven Smith comes down the wicket and hits the ball straight down the ground.

18:01 IST: Out! Trying to hit Bipul over the rope, Rahane miscues the ball and gets caught at mid-on.

17:58 IST: Four! Little edge from Tripathi and the ball runs down to the rope.

17:57 IST: Four! Tripathi gets his first boundary of the innings, drives Bhuvneshwar through covers.

17:52 IST: Brilliant first over from Bhuvneshwar Kumar, gives away only one run.

17:49 IST: Welcome back to the second innings of the match between RPS and SRH.

17:30 IST: Four! Squeezing the ball out inside out, Henriques brings his fifty up.

17:29 IST: Four! Playing the bouncer late, Hooda guides the ball away for a boundary over keeper's head.

17:26 IST: Six! Henriques puts the ball away for a huge maximum,  times the slower delivery perfectly.

17:21 IST: Four! Hooda heaves for a maximum, but the ball takes a thick edge and goes past the wicket-keeper for a boundary.

17:18 IST: Four! Henriques coming to the rescue, cuts and places the ball beautifully for a boundary.

17:16 IST: Wicket! Unadkat gets the big man, trying the switch hit, Warner misses the ball as it crushes into the wickets. SRH 129 for three.

17:14 IST: Six! Henriques slams the ball easily out of the ground. Good start to the over.

17:09 IST: Four! Wide from Christian as Warner slashes it for a boundary with help of an outside edge.

17:07 IST: Warner failed to put the free-hit away for a boundary or a biggy.

17:06 IST: No ball from Tahir as the ball was above waist-line, SRH gets a free hit!

17:05 IST: Six! David Warner gets in position for the switch hit and dispatches the ball for a maximum.

16:52 IST: Four! Williamson turning the heat on in Pune vs Hyderabad.

16:51 IST: Six! Kane Williamson gets the top edge of the bat and the ball flies over fine leg.

16:50 IST: Dropped! Smith does his fellow Australian a favour. Puts down Warner at mid-off.

Wait for it! wait for it! It's #MahirTahir. Strikes on his 1st ball and not for the 1st time. Gabbar departs. #RPSvSRH #RangWahiJungNayi

16:29 IST: Four! Perfect timing from Dhawan sends the ball straight down the ground for a boundary.

​16:24 IST: Four! Full length delivery from Shardul Thakur, Warner dismisses it for a boundary straight down the ground.

16:16 IST: Four! Slog sweep from Dhawan and the ball races to the rope for boundary.

16:09 IST: Great over from Washington Sundar, concedes only 5 runs from his first over.

16:04 IST: Decent start for both teams, after first over SRH stand at 7 runs for no loss.

16:02 IST: Four! Dhawan advances down the wicket and slams the ball for the first boundary.

15:59 IST: Players and umpires make their way out to the field.

15:38 IST: RPS gearing up before their match Sunrisers Hyderabad.

#IPL Match 24: @stevesmith49 is back! Here are the @RPSupergiants boys gearing up for #RPSvSRH pic.twitter.com/8RTlu234nQ

15:37 IST: David Warner and Co warming up before the match.

#IPL Match 24: @SunRisers are warming up ahead of #RPSvSRH pic.twitter.com/m0wZ0EHDZA

15:34 IST: For Pune Supergiant, Washington Sundar makes his IPL debut as Rahul Chahar is left out.

15:11 IST: Standing at the bottom of the table, Pune will be looking to gain points and jump places.

15:10 IST: Hello and welcome to the live blog of the match between Rising Pune Supergiant and Sunrisers Hyderabad in Pune.

SRH on the other hand began with two wins, then lost two matches before they came back with wins over Kings XI Punjab and Delhi Daredevils. So they will definitely be more clued into having momentum.

Those two wins have put SRH at the third spot on the table, while RPS, with just 2 wins from 5 matches, are just above Gujarat Lions, a position they would definitely like to improve on.

RPS captain Steve Smith went off to Dubai in the break and possibly cleared his head and would be coming back with fresh ideas.

On the other side, his Australian team-mate David Warner would be keen to keep Smith and his side at bay.