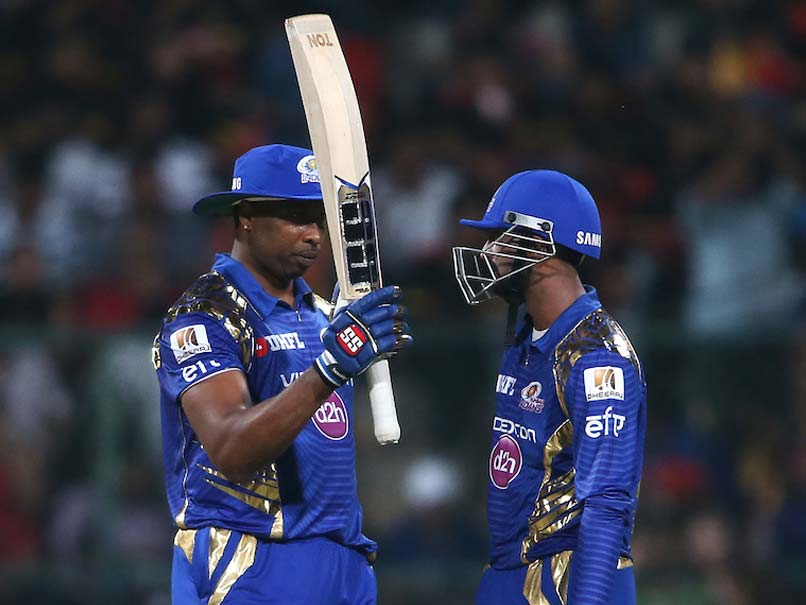 Kieron Pollard scripted Mumbai Indians' sensational four-wicket win over Royal Challengers Bangalore with a blistering 70-run knock which overshadowed Samuel Badree's hat-trick in an IPL game in Bengaluru on Friday. Chasing a 143-run target, Mumbai looked down and out with Badree's hat-trick that reducing the visitors to seven for four in the third over. It was first hat-trick of IPL-10. It soon became 33 for five but the big-hitting West Indian and Krunal Pandya (37 not out) stitched a match-winning 93-run partnership to stage a dramatic turnaround.

Mumbai went into the innings break having the upper hand after limiting RCB to 142 for five despite Virat Kohli striking a classy 62 off 47 balls in his first competitive outing in nearly a month.

Mumbai, with the batting they possess, were expected to chase the 143-run target comfortably on a batting friendly pitch at the Chinnaswamy Stadium.

However, Badree, playing his first match of the tournament, broke Mumbai's back by removing Parthiv Patel, Mitchell McClenaghan and Rohit Sharma in successive balls to have the visitors reeling at seven for four in the third over.

It was a remarkable effort by the West Indian, considering he picked all those three wickets in the Powerplay. He dismissed Patel and Rohit with a googly, the left-hander handing a simple catch to Gayle at short extra cover while another went through Rohit's defence, sending the packed crowd into a frenzy.

The spinner had the luck on his side too as he dismissed McClenaghan off a low full-toss. He ended his spell with a wicket, sending back the in-form Nitish Rana to leave Mumbai at 33 for five in eight overs. Badreee returned incredible figures of 4-1-9-4.

What followed was sensible batting from both Pollard and Krunal. They kept their team in the hunt with an odd boundary but did not take too many risks.

The game tilted hugely in the favour of Mumbai in the 16th over when Pollard pummelled Pawan Negi for two huge sixes, reducing the target to 33 off 24 balls.

Pollard departed after smashing four sixes and three fours in total, more importantly doing the job when his team needed it most.

Hardik Pandya ended the game in emphatic fashion, a six off Tymal Mills over long on.

Kohli, out of action for almost a month with a shoulder injury he suffered during the third Test against Australia, got into the groove in no time.

After mistiming a short ball off Harbhajan Singh for a single in the second over of the innings, Kohli found his ominous touch.

The next over bowled by pacer Tim Southee saw him hitting a straight six and a couple of fours, one was a crisp pull shot and another a whip over mid-on.

All this while his opening partner Chris Gayle (22 off 27) was not unable to unleash the big hits he is known for. Though the West Indian did manage to hit a six off Harbhajan, he was far from his best.

Kohli, who smashed five boundaries and two sixes, got to his half century by a dispatching a full toss off Jasprit Bumrah for a maximum.

However, RCB lost their way after his dismissal in the 16th over, struggling to 127 for five from 110 for one in a space of 17 balls.

The opening partnership of 63 runs between Kohli and Gayle turned out to the highest, followed by a 47-run stand between the captain and Ab de Villiers (19 off 21 balls).

The Mumbai bowlers who impressed were Mitchell McClenaghan, Hardika Pandya and Harbhajan, who opened the bowling for the second time this season.

Comments
Topics mentioned in this article
Mumbai Indians Royal Challengers Bangalore Virat Kohli AB de Villiers Kieron Pollard Samuel Badree Chris Gayle M.Chinnaswamy Stadium, Bengaluru IPL 2017 Cricket
Get the latest updates on India vs Australia Series, check out the India vs Australia Schedule for 2020-21 and Ind vs Aus live score . Like us on Facebook or follow us on Twitter for more sports updates. You can also download the NDTV Cricket app for Android or iOS.