Parker scored 25 points and Tim Duncan had 16 points and 13 rebounds for the Spurs, who moved out of a tie with Oklahoma City for the conference lead. 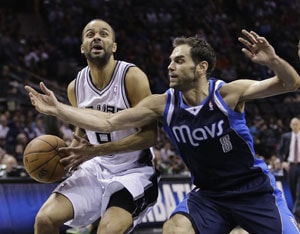 San Antonio cruised past state rival Dallas 112-90 on Wednesday to take the outright lead in the NBA's Western Conference, with the old guard of Tony Parker and Tim Duncan again to the fore for the Spurs.

Parker scored 25 points and Tim Duncan had 16 points and 13 rebounds for the Spurs, who moved out of a tie with Oklahoma City for the conference lead.

Monta Ellis had 21 points but Vince Carter as the only other Mavericks player in double figures, with Dirk Nowitzki going 3 for 14 and ending up with only eight points.

Atlanta held off a weary Indiana to win 97-87, with Kyle Korver scoring 17 points and Pero Antic 16.

The Hawks extended Indiana's misery at Philips Arena, where the Pacers have not won since 2006. They dropped their 12th in a row in Atlanta, the team's longest active road losing streak against any team.

Indiana looked very much like a squad playing its fourth game in five nights and also had dealt with travel issues because of the arctic weather. The Pacers managed just 12 points in the first quarter and 32 in the opening half - both season lows.

The result prevented the Warriors from becoming the first team in NBA history to complete a 7-0 road trip.

Kevin Garnett scored 11 of his 13 points in the final quarter and stole Stephen Curry's pass with the Warriors down three in the final half-minute.

Curry scored 34 points for the Warriors, who were bidding for a franchise-record 11th consecutive victory. But until Curry's jumper with 5.8 seconds to go, they didn't make a field goal after Klay Thompson's 3-pointer with 4:07 remaining.

Phoenix's Gerald Green made a baseline jump shot with 3.9 seconds remaining to give the Suns a 104-103 win at Minnesota.

The Suns trailed by six points with just over 90 seconds to play, but closed the game on a 7-0 run.

Kevin Martin scored 20 points for the Wolves, but his running shot at the buzzer hit the rim.

Houston's James Harden tied a season high with 38 points to lead the Rockets to a 113-99 victory over the Los Angeles Lakers.

Dwight Howard added 20 points and 13 rebounds to get his first win against his former team as the Rockets used a big third-quarter run to take the lead and send the injury-riddled Lakers to their third straight loss.

Harden notched his third-straight 30-point game, piling up 113 points in the process.

The Rockets trailed in the third quarter before going on a 17-2 run to take an 80-67 lead and roll to win.

Portland's Nicolas Batum had 14 points, 10 rebounds and a career-high 14 assists for his fourth career triple-double as the Trail Blazers won 110-94 to hand Orlando its fifth straight loss.

Washington made it six wins from seven home games with a 102-96 victory at New Orleans, with Trevor Ariza scoring 21 points.

Los Angeles' Blake Griffin scored 29 points to lead the Clippers to a 111-105 victory over Boston.

Comments
Topics mentioned in this article
IPL 2014 Cricket Chennai Super Kings vs Delhi Daredevils, 2014-04-21 NBA
Get the latest Cricket news, check out the India cricket schedule, Cricket live score . Like us on Facebook or follow us on Twitter for more sports updates. You can also download the NDTV Cricket app for Android or iOS.