While walking around the hill station, one doesn't get the feeling that India's madly-loved cricket stars will be playing at the scenic HPCA Stadium after almost two years when India take on West Indies in the fourth ODI. The locals and organisers say excitement during the IPL is much more palpable than at the time of an international match. 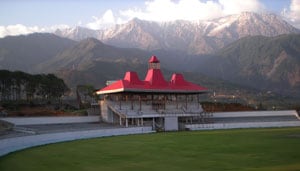 A file picture of the HPCA Stadium in Dharamsala.

Dharamsala may be a quiet town but its residents prefer the fast-paced T20 version of cricket they often see in the IPL, with the lack of buzz ahead of the fourth one-day International between India and the West Indies being a clear indicator.

While walking around the hill station, one doesn't get the feeling that India's madly-loved cricket stars will be playing at the scenic HPCA Stadium after almost two years. The locals and organisers say excitement during the IPL is much more palpable than at the time of an international match.

Mohit Sood, media manager at the Himachal Pradesh Cricket Association (HPCA), attributed the lack of buzz in the picturesque town to the ongoing festive season. He added that about 12,000 tickets have been sold for the ODI while the seating capacity is 19,500. (Hollywood Actor Richard Gere, Fans Throng Dalai Lama's Abode)

"I think the lack of buzz is because Diwali is round the corner. People especially the tourists are not ready to leave their homes and travel all the way to Dharamsala. The scenes would have been different had the match been organised in a bigger city," Sood told PTI on Thursday.

He added: "The IPL is more popular as it is fast paced and less time-consuming. Its timing is also much better. The schools are off during the IPL leg here and tourists flock to Dharamsala in thousands. Having said that, we are expecting a full stadium on Friday."

Arvind Sharma, a travel agent based out of McLeodGanj claims the tourists' influx is high during the IPL.

"I can safely say there are still many hotel rooms available around Dharamsala and McLeodGanj. When the IPL season is on, it is all packed a week prior to the matches. The rush is definitely more during the IPL. May be not many tourists could plan well with doubts surrounding over the ODI," he said.

"We understand it is festival season but I request people to come to the stadium for the match and hopefully celebrate Diwali with India's win."

Comments
Topics mentioned in this article
IPL 2014 India Cricket Team West Indies Cricket Team Himachal Pradesh Cricket Association Stadium, Dharamsala Cricket
Get the latest updates on IPL Auction 2023 and check out  IPL 2023 and Live Cricket Score. Like us on Facebook or follow us on Twitter for more sports updates. You can also download the NDTV Cricket app for Android or iOS.