IPL 7: I promised My Son a Good Knock After His Schoolmates Teased Him, Says Virender Sehwag

After hitting a 58-ball 122 against the Chennai Super Kings in Qualifier 2 of Indian Premier League-7, Kings XI Punjab opener Virender Sehwag turned emotional. The former Indian Test opener said he got a huge load off his chest after scoring his second IPL century ever because his son was teased by his mates for his poor form. (Scorecard) 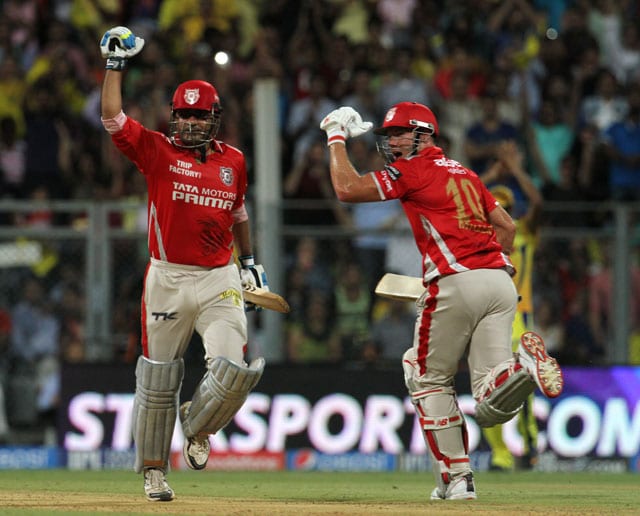 "My son's friends were teasing him about his father not scoring runs and I told him, hold on beta, there is still time. During the last couple of games I wanted to focus on my batting and had to win at least one game for Kings XI Punjab," said Sehwag.

"Whenever I went there to bat, and got out early, I got a call from my wife," he added.

"I had a chat with Sachin Tendulkar as well and put the conscious effort to stay till the 10-12th over. I promised someone that there is one big innings that I have to play and maybe it will come in the playoffs."

"Today is Ness Wadia's boirthday and I told him I will give him the best birthday gift. Whenever I got out, my son kept telling me, 'papa you are not scoring runs,' I told him hold on, there is still time," Sehwag added after being given the Man-of-the-Match award.

It was all Sehwag from the word go after Chennai put Punjab in to bat at Wankhede Stadium. Sehwag thrashed Nehra for a cracking off-side boundary on the last ball of the first over, reminding everyone of his class.

For a little while, it looked as if Punjab were getting a little slow as his opening partner Manan Vohra occupied much of the strike but then Sehwag made his intentions clear with another boundary off Mohit Sharma towards the end of the third over.

From then on, it was a flurry of boundaries from Sehwag that sent the Wankhede crowd in a continuous state of cheer.

After the end of the powerplay overs, Sehwag decided he would now be only aiming at clearing the ground as his fours turned into sixes, one after the other.

Sehwag hit a total of 12 fours and eight sixes as he slammed his way to a second IPL hundred. Sehwag became the second centurion this season after Mumbai Indians' Lendl Simmons.

Sehwag, who had not made much of an impact during this year's IPL despite getting some quick 30-run knocks, peaked at the right time for his team, as they were trying to reach their maiden IPL final against Chennai Super Kings in Qualifier 2. Punjab had earlier lost the first qualifer against Kolkata Knight Riders in a game that had its outcome threatened by rain.

Still a long way to go before anyone can write off the wonder lad from Najafgarh, it seems!

Comments
Topics mentioned in this article
Cricket IPL 2014
Get the latest updates on India vs England Series, India vs England , live score and IPL 2021 Auction . Like us on Facebook or follow us on Twitter for more sports updates. You can also download the NDTV Cricket app for Android or iOS.