Kings XI Punjab have entered the final of the Indian Premier League for the first time while Kolkata Knight Riders won the 2012 edition of the tournament.

The focus has remained firmly on cricket this time around and in what seems to be the perfect finale, the season's most consistent team Kings XI Punjab would eye a maiden triumph against the ever-resilient Kolkata Knight Riders in the title clash of the seventh Indian Premier League here on Sunday. (Sehwag Takes Punjab to First IPL Final) 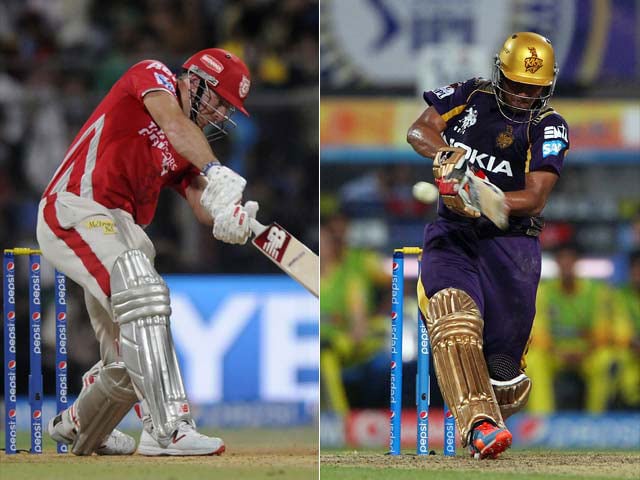 After a few controversy-marred seasons, the IPL organisers can finally heave a sigh of relief with the ongoing edition passing off rather smoothly. (Blog | Scorecard)

Having cracked a 58-ball 122 that paved the way for KXIP's entry into their first IPL final, veteran opener Virender Sehwag along with Glenn Maxwell and David Miller will be the biggest threat for KKR, who will bank on their strong bowling unit, led by Sunil Narine.

Players from both sides will have their job cut out as they will look to gift their owners Shah Rukh Khan and Priety Zinta, who had played on-screen lovers in Bollywood film Veer-Zaara, the trophy.

Unlike Kolkata, who have won the title once before, Punjab have never been a part of the finals.

For Kolkata, to repeat the feat of lifting the trophy for the second time, however, will be a daunting task considering the opponents they are faced with.

Kolkata will also have to cope with Maxwell, who is among the top run-getters this season.

Boasting of a strong middle-order in Miller, Manan Vohra, skipper George Bailey and Wriddhiman Saha, KXIP should not worry too much about Maxwell's lean patch of late.

The 25-year-old Australian will like to take a leaf out of his 90-plus run knocks in Abu Dhabi and Cuttack in the group stage of the tournament.

Maxwell was even more dominating in their subsequent clash earlier this month at Cuttack, where he hit a whirlwind 90 off just 35 balls to power Punjab to a mammoth 231. The destructive ability of Maxwell will certainly come up for discussion by Kolkata's think-tank.

Kolkata will certainly look to take advantage of the fact that Kings XI, who had looked almost unstoppable during the group stage, have had their hiccups of late. They were beaten comprehensively at the Eden Gardens on May 28.

With two wins from their first seven matches, Kolkata were written off midway into the tournament, but they bounced back in style to seal a playoff berth.

Yusuf Pathan's 22-ball 72 lifted them to the second spot and they ended up winning eight matches at a stretch.

The heavyweights tag would be with Punjab but at the same time they would be wary of Kolkata's momentum and it would be quite a challenge for Bailey's men to breach their opponent's resilience at the Chinnaswamy Stadium.

Orange Cap holder Robin Uthappa has been instrumental in giving fine starts with skipper Gautam Gambhir, who too has been in impressive form.

The duo has been successfully giving the team starts before the likes of Shakib Al Hasan, Ryan ten Doeschate and Yusuf prop up the run rate in the middle overs.

Yusuf has shown how dangerous he can be and even world number one fast bowler Dale Steyn was no challenge for him. The Baroda star smashed the South African for 26 runs in an over during his explosive knock.

KKR were required to chase 161 in 15.2 overs to topple Chennai Super Kings from the second place and Yusuf's blitz ensured they cruise to the target in 14.2 overs.

Yusuf will be a threat for KXIP in what promises to be yet another run feast with both teams boasting of powerful batting line-ups.

The slow bowlers could play a crucial role and the KKR camp would have an extra edge in Narine who has the Purple Cap. They also have left-armer Shakib as part of a potent spin attack.

Maxwell was dismissed by leg-spinners six times in this IPL and Shakib will surely look to exploit the Aussie's weakness.

What is heartening for Punjab is that they also have a good spin attack in Karanveer Singh and Akshar Patel, who bowled splendidly against Chennai, after they had scored an unbelievable 100 runs in six overs.

It would be interesting to see if they continue with the two spinners in the final.

With Mitchell Johnson spearheading the pace department, Punjab pacers have most number of wickets but at the same time, their spinners have the fewest.