Kolkata Knight Riders captain Gautam Gambhir is upset after the team's celebrations led to pandemonium and injuries to several fans outside Eden Gardens. 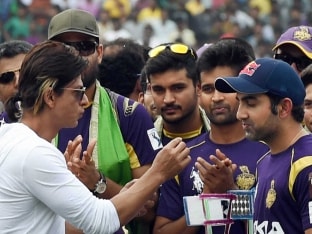 Gautam Gambhir is disappointed that Kolkata Knight Riders Indian Premier league victory celebrations at Eden Gardens on June 3 was marred by chaos. Several fans were seriously injured after police lathicharged enthusiastic fans who wanted to enter the stadium and watch their heroes.

On a hot and sultry day, more than 100,000 fans turned up in and around Eden Gardens to catch a glimpse of KKR players and their principal team owner, Shah Rukh Khan. The Bollywood star arrived almost four hours late due to a technical snag that grounded his aircraft at Mumbai.

While 50,000 fans made their way inside the Eden Gardens with 'old' match tickets distributed by the police the day before, almost an equal number turned up to be part of the quickly-arranged celebrations. Unable to control the crowd, the police lathicharged excited fans leaving several of them injured and profusely bleeding.

The state's maverick chief minister Mamata Banerjee had hired a private jet to fly back from North Bengal to join the KKR party, but the quickly-arranged event left a bad taste in the mouth and Gambhir was certainly not amused.

In his column in the Hindustan Times, Gambhir wrote: "I must say I was disappointed by the inconvenience KKR's felicitation ceremony caused to Kolkatans. As it is cricket fans in India, who are the most important stakeholders, are not treated well. To make matters worse there was lathicharge on innocents."

Kolkata won their second IPL crown in three seasons but the wild celebrations were clearly a spoilsport. "God-willing, my KKR team wins many more trophies but as far as I am concerned we're done with such felicitations," wrote Gambhir.

The KKR skipper and several other players has left the celebrations midway to catch a flight home. Of course, Shah Rukh kept the fans entertained with his 'magic' while the chief minister and her team of ministers sported a broad grin for staging an event that was far from well done.