West Indies limited-overs captain Kieron Pollard said that people should not be too quick to judge the slew of young cricketers emerging from the Caribbean. 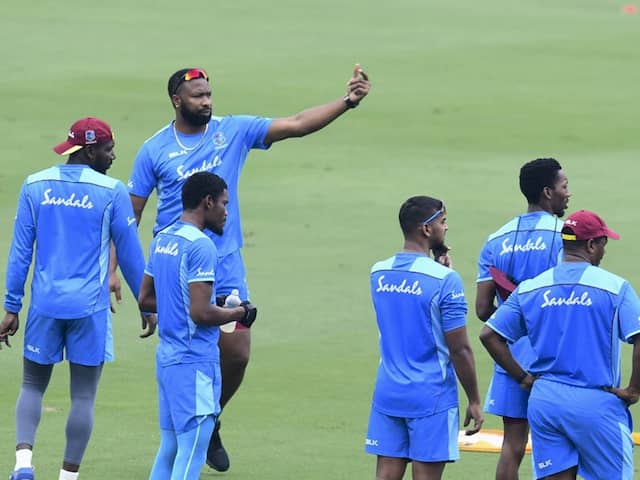 The West Indies have included several youngsters in their 15-member squad for India tour.© AFP

India are set to host the West Indies for a three-match Twenty20 International (T20I) series starting in Hyderabad on Friday. On the eve of the opening clash, skipper Kieron Pollard said that young West Indies cricketers need to be protected from "vultures of the game" when they are initiated into international cricket. The visitors have included several youngsters in their 15-member squad and Pollard believes that they need to be given enough opportunities to shine on the international platform. Youngsters like Brandon King, Khary Pierre, Sherfane Rutherford, Keserick Williams and Hayden Walsh Jr were preferred by the West Indies for their upcoming tour in India to experienced players like Carlos Brathwaite, Andre Russell and Dwayne Bravo.

"They (Brandon King and Keserick Williams) have been pretty good. It's good that we have young guys coming in from the CPL. They are excited to represent West Indies. But the problem is, we as individuals try to judge people too quickly," Pollard said at the pre-match press conference on Thursday.

The West Indies limited overs skipper added that the team needs to be patient with the newcomers and protect them from the negativity.

"We need to have patience. At the end of the day we need results but sometimes you have to be honest with yourself. We look forward to these talents showing the world what they can do. Sometime you need to have umbrella over them and protect them from the vultures out there to pull them down," Pollard added.

On the other hand, India captain Virat Kohli said that there is only spot left to be filled in the team's pace attack for next year's T20 World Cup in Australia, indicating that Jasprit Bumrah, Bhuvneshwar Kumar and Mohammed Shami are almost certain to make the cut.

"The fight obviously is for one spot and I think more or less three guys have made a place for themselves. It's going to be a healthy competition and it will be interesting to see how it pans out," Kohli said.

The three-match series kicks off in Hyderabad on Friday while Thiruvananthapuram will host the second T20I. The final game of the series will be played in Mumbai on December 11.

Virat Kohli India vs West Indies 2019/20 Cricket India vs West Indies, 1st T20I
Get the latest Cricket news, check out the India cricket schedule, Cricket live score . Like us on Facebook or follow us on Twitter for more sports updates. You can also download the NDTV Cricket app for Android or iOS.