India clinched the five-match One-day international (ODI) against the Windies 3-1. 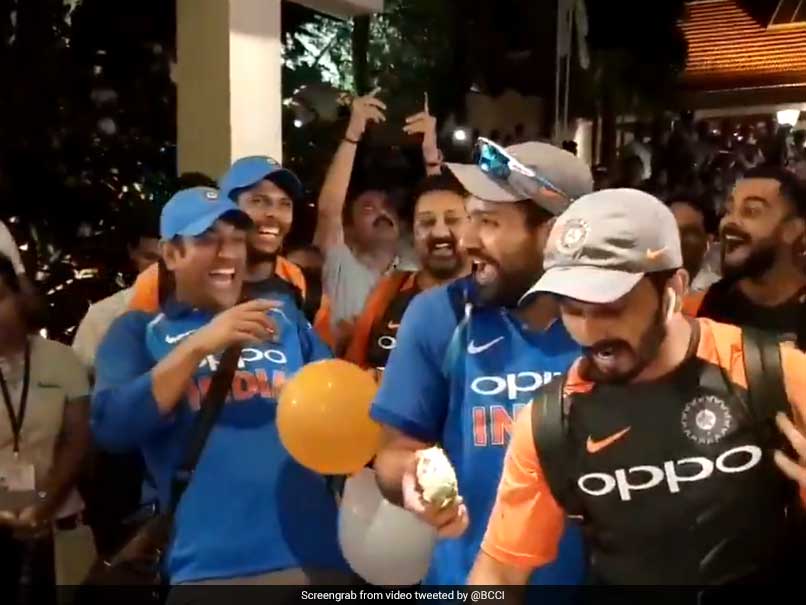 BCCI uploaded a video of Team India celebrating their win over the Windies.© Twitter

A dominant India outclassed the Windies in the fifth and final One-day international (ODI) by nine wickets to win the five-match series 3-1. As a result of that, India registered their sixth successive ODI series win on home soil. An all-round performance from the hosts saw them win the match in just 14.5 overs, before bowling the visitors out for a meagre 104 runs. The Indian cricket board uploaded a video on Twitter where the Indian team can be seen receiving a warm welcome from the hotel staff on reaching the hotel. "Back at the team hotel after an early wrap and it is time to celebrate," the video was captioned.

Back at the team hotel after an early wrap and it is time to celebrate. #TeamIndia #INDvWI pic.twitter.com/qW7mtAoXgq

Earlier today, Windies captain Jason Holder won the toss, opted to bat and surrendered meekly in front of a solid Indian bowling unit. Ravindra Jadeja starred with the ball as he ended the match with figures of 4/34 in 9.5 overs.

Apart from Jadeja, Jasprit Bumrah and Khaleel Ahmed chipped in with two wickets each to derail the Windies innings.

Holder (25) scored the highest for the tourists as none of the batsmen except him and Marlon Samuels (24) provided resistance to India.

In reply, India lost opener Shikhar Dhawan early as his poor run in the series continued. However, Rohit, who became the second-highest run-getter in 2018, played outstanding cricket to ensure that India do not lose anymore wickets.

Kohli credited the bowling unit for pitching the ball in the right place.

"It was a clinical performance. Credit has to go to the bowling unit, pitching the ball in the right place," Kohli said in a post-match presentation.

"We wanted to bowl first anyway and we got lucky. We were surprised West Indies batted," he added.

The Indian run-machine became the quickest to 10,000 ODI runs in his 205th innings in Visakhapatnam ODI that ended in a tie last week.

"To get runs as captain always gives me confidence. It won't happen all the time, but when I'm going, I want to keep going longer," said Kohli.

"I don't play for awards, just to impact the series and help the team win."

The two sides now head to Kolkata for the first of three Twenty20 internationals on November 4.

MS Dhoni India vs West Indies 2018 Cricket
Get the latest updates on Olympics 2020, Olympics 2020 Medal Tally, Live Cricket Score . Like us on Facebook or follow us on Twitter for more sports updates. You can also download the NDTV Cricket app for Android or iOS.