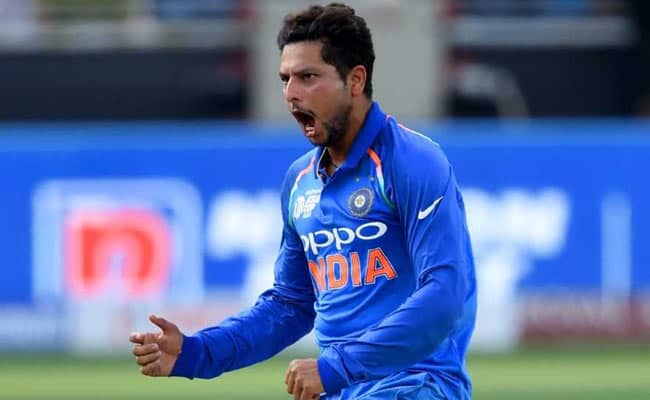 Earlier, Rohit produced a master class act as he remained unbeaten on 111 off 61 balls. The Indian captain now has highest number of hundreds in shortest format along with highest aggregate of runs surpassing regular skipper Virat Kohli. Rohit was at his brutal best as he hit eight boundaries and seven towering sixes to propel India to the big score after being sent into bat. Rohit and Shikhar Dhawan (43 off 41) made up for their rare failure in the first T20 in Kolkata on Sunday, stitching 123 runs off 84 balls for the opening wicket to lay the foundation for a big score. (SCORECARD) (Play fantasy league and win cash daily)

22:30 IST: Thank you for joining us for the live blog. Do tune back in for the last match of the series on November 11.

22:27 IST: And it is all over! India beat the Windies by 71 runs to clinch the three-match series 2-0 at Lucknow. Superlative performance from the hosts and yet another batting collapse for the Windies.

22:24 IST: FOUR! Bumrah bowls full and on the pads, Oshane Thomas, the new batsman, flicks it nonchalantly for a boundary.

22:20 IST: OUT!! Jasprit Bumrah takes his first wicket of the match. K Pierre fails to read the slower ball as he chips the ball straight to Bumrah. Windies now 9 down.

22:16 IST: OUT!! Bhuvneshwar Kumar gets his second wicket of the match. Keemo Paul looking to clear the in field, fails to connect and slaps the ball straight down Rohit Sharma's throat. Windies 114/8 in 18.4 overs.

22:12 IST: SIX!! Brathwaite lifts Kuldeep straight down the ground for a maximum. This was an expensive over by Kuldeep. Windies 112/7 in 18 overs, need 84 more runs to win.

22:11 IST: SIX and SIX!! Keemo Paul did not let the little incident disturb him as he pulls two short delivery straight in the crowd. Two very big maximums from the Keemo Paul.

22:10 IST: Keemo Paul survives a close call. Keemo goes for the reverse sweep, misses and gets rapped on the pads. The on-field umpire raises his finger and the Windies opt for the DRS straightaway. The replay shows that the ball was missing the off stump.

21:53 IST: OUT!! Fabian Allen, the new batsman in, departs for a duck. Allen hits the ball straight to Krunal and  takes off for a run. Brathwaite, at the other end, does not acknowledge the call. Allen, who was miles down the pitch, failed to reach the crease as Krunal Pandya's direct hit brought India closer to a series win.

21:52 IST: OUT!! Bhuvneshwar gets his first wicket of the match. Bowls a slower delivery on the pads, Denesh Ramdin flicks it straight to Rohit Sharma at square leg. Windies 81/6 in 13.4 overs.

21:47 IST: FOUR!! Krunal Pandya bowls a bouncer, Brathwaite ducks and the ball misses Dinesh Karthik as it rolls away to the boundary. This was something we don't see often.

21:39 IST: OUT!! Jasprit Bumrah dismisses Kieron Pollard cheaply. Bumrah bowls a short pitch delivery, Pollard was caught off-guard as he sends the ball high up in the air and Bumrah takes a comfortable catch. Pollard, on the other hand, may get a sanction for a deliberate attempt of obstructing the bowler.

21:32 IST: FOUR! Kuldeep bowls full and outside off, Pollard, the new man in, slaps it down the ground with power. Dhawan tries to stop but the ball wins the race.

21:28 IST: BOWLED!! Kuldeep Yadav bowls a tossed up delivery just outside off, Pooran was stuck to his crease as he pushed at that - more in hope then any conviction, huge gap between bat and pad, the ball found its way and knocked out the off-stump

21:25 IST: OUT! Kuldeep Yadav, the new bowler in, bowls short and well outside off, Bravo backed away and went with hard hands on the cut, got a thick top-edge and Rohit at the slips takes a wonderful catch.

Brilliant catch by @imro45. Always difficult to take catches off the back foot like the one we just saw. Simply brilliant!! #INDvWI

21:22 IST: Krunal Pandya concedes eight runs in his first over.

21:15 IST: OUT! Khaleel Ahmed removes the second opener. Shimron Hetmyer goes for a maximum, miscues and Dhawan takes a comfortable catch at long on. Windies 33/2 after 5.2 overs.

21:14 IST: FOUR!! Khaleel Ahmed provides width outside off, Hetmyer throws his bat and the ball takes a thick outside edge to run down the third-man region.

21:09 IST: FOUR! Jasprit Bumrah, the new bowler in, bowls on the leg side and Bravo nicks it fine. The ball runs down to the ropes for a boundary.

21:06 IST: FOUR!! Khaleel Ahmed bowls length ball at the stumps, Hetmyer clears his left-leg and then heaves it wide of mid-wicket, there's a man in the deep, but the ball races away to the ropes.

21:05 IST: FOUR!! Khaleel bowls short and Hetmyer makes room and slaps the ball straight down the ground for a boundary. Windies will require a lot of those boundaries to win the tie.

20:56 IST: FOUR!! Khaleel Ahmed bangs the ball in short and well outside off. Bravo shuffles and pull with great power. Even though he didn't make connection, the ball raced away to the boundary.

20:49 IST: SIX!! Shai Hope leans forward and lifts Bhuvneshwar straight down the ground for a maximum. "Glorious," say the commentators on air.

20:36 IST: Stats-- Rohit is the first player to hit two T20I centuries as a captain. And Rohit Sharma with four T20Is hundred leads the list of most centuries in he shortest format of the game.

20:33 IST: FOUR!! Rohit Sharma scores his 4th T20I century. What a knock this has been from the Indian captain.

20:25 IST: FOUR!! A flat full toss from Pierre and Rohit cuts it with authority for yet another boundary. Rohit is now nearing his 16th T20I hundred.

20:24 IST: SIX!! Rohit shimmies down the wicket and gets the toe end of the bat but the ball easily crosses the ropes. The bottom-hand comes into play for Rohit as he moves onto 86*.

20:21 IST: FOUR!! Two-in-two for KL Rahul. Brathwaite bowls a slower delivery and cramps up Rahul for space. However, Rahul makes room and cuts it beautifully to collect yet another boundary.

20:20 IST: FOUR!! Brathwaite bowls full and gives little bit of room to KL Rahul as he lifts the ball over covers for a boundary. That was easy picking for the Indian batsman.

20:15 IST: OUT!! Pierre gets his first wicket as Pant gets ambitious. Pant tries to hit a massive six on the leg side, doesn't connect and Hetmyer takes a good catch. India 133/2 in 15.2 overs.

20:14 IST: FOUR!! Rishabh Pant, the new batsman in, flicks Pierre for a boundary. The bottom-hand comes into play as he gets his first boundary.

20:10 IST: FOUR!! Wide outside off from Oshane Thomas and Rohit guides the ball for yet another boundary. This is sublime batting from the Indian batsman.

20:08 IST: OUT!! Fabian Allen gets the big through for his team, dismisses Dhawan for 43. Dhawan goes for the sweep, miscues and Nicholas Pooran takes a good low catch. India 123/1 in 14 overs.

20:01 IST: FOUR! Short and wide from Keemo Paul and Rohit cuts it with great power. 100-run partnership also comes up between Rohit and Dhawan.

20:00 IST: FIFTY!! Rohit Sharma guides the ball straight down the ground to bring up his 16th T20I fifty. Rohit is on a roll here.

What an innings this from Captain @ImRo45. Brings up his 16th T20I FIFTY at the all new Atal Bihari Vajpayee Ekana Cricket Stadium.#INDvWI pic.twitter.com/HQisjAu8eu

19:53 IST: With an unbeaten 86-run partnership between Rohit and Dhawan, India now have registered their highest opening stand against the Windies in T20Is.

19:46 IST: FOUR!! Another short pitch delivery from Brathwaite and Rohit says thank you. Rohit gets in great position and pulls the Windies captain for a powerful boundary. The ball rocketed away to the ropes. Rohit is looking in great form.

19:43 IST: SIX!! Short pitch delivery from Brathwaite, Rohit gets into position early and pulls the ball over short fine leg for a maximum. The ball travelled quickly, that was some display of brute force from the Indian captain.

19:41 IST: DROPPED!! Dhawan gets a life as Keemo Paul drops a sitter on the boundary off Brathwaite. Dhawan goes after the short pitch ball, pulls and gets only the elevation. Paul in the boundary fails to collect the ball due to lack of balance. The Windies captain is not happy.

19:35 IST: Brathwaite concedes eight runs in his first over of the match.

19:30 IST: Shikhar Dhawan reaches 1,000 T20Is runs with a single off Brathwaite. India look in total control of the game.

19:28 IST: SIX!! Rohit clears the front and pummels Pierre for a maximum. The ground is huge but not big enough for the Indian captain. The ball clears the ropes with ease.

19:26 IST: FOUR!! Dhawan is slowly getting in the groove. Leans forward and drives Thomas exquisitely for a boundary.

19:25 IST: FOUR!! Dhawan gets into position early and pulls Thomas wide of deep mid-wicket for a boundary. Dhawan ensures he makes use of this free-hit!

19:21 IST: SIX! Thomas bowls a length ball and Rohit Sharma lifts him straight down the ground for the first maximum of the match. With this, the India right-handed batsman surpasses Virat Kohli to become India's highest run-getter in T20Is.

19:16 IST: FOUR!! Rohit Sharma welcomes Khary Pierre with a boundary straight down the ground. This is the first boundary of the match. Peirre bowls on a fuller length, Rohit makes room and lifts him over the mid-off for a two-bounce boundary.

19:08 IST: NO BALL from Keemo Paul and India get a free-hit!! Dhawan goes for the slog hit but gets beaten by a slower delivery. That was poor from Dhawan.

19:05 IST: First runs on the board for India. Dhawan flicks a Keemo Paul full ball towards mid-wicket for a single.

19:03 IST: Oshane Thomas starts off with a maiden overs. India 0/0 after the first over.

19:00 IST: Rohit Sharma and Shikhar Dhawan opening the batting for India. Oshane Thomas opening the bowling for the Windies.

The last international cricket match Lucknow hosted was 24 years ago.

Here's our Playing XI for the 2nd Paytm T20I.

18:35 IST: Rohit: "We would have bowled first. There is grass on the pitch and I am hoping pitch will hold up. But I am not sure about the outfield as there is lot of dew. We have Bhuvi back in our team, in place of Umesh. It is good to have Bhuvneshwar Kumar back but it is unfortunate for Umesh Yadav to miss only after 1 match but team composition is very important."

18:32 IST: Brathwaite: "We will bowl first. This is a new stadium, first international game and we want to chase. Dew factor is also one of the reasons but it's more about the pitch. We have one change in the team. Nicholas Pooran is in the team in place of Powell. He is a good player of spin and he is a left-hander so that will add balance to our team."

Windies win the toss and elect to bowl first in the 2nd Paytm T20I against #TeamIndia.#INDvWI pic.twitter.com/C16jMLXdbp

18:00 IST: Hello and welcome to the live blog of the 2nd T20I match between India vs Windies from Lucknow.

In the first match, besides Rohit, Shikhar Dhawan (3), KL Rahul (16), Rishabh Pant (1), and Manish Pandey (19) could not perform with the bat. Like the Nidahas Trophy 2018 final, Dinesh Karthik played a calculated 34-ball 31 and strung together an unbeaten 27-run partnership with Krunal Pandya, helping India to have a winning start to the T20I series.On the bowling front, Kuldeep Yadav, adjudged man of the match, ended the match with figures of 3/13 from his four overs, while left-arm pacer Khaleel Ahmed (1/16) and debutant Krunal Pandya (1/15) were economical.