The five-match ODI series between India and the Windies is now deadlocked at 1-1. 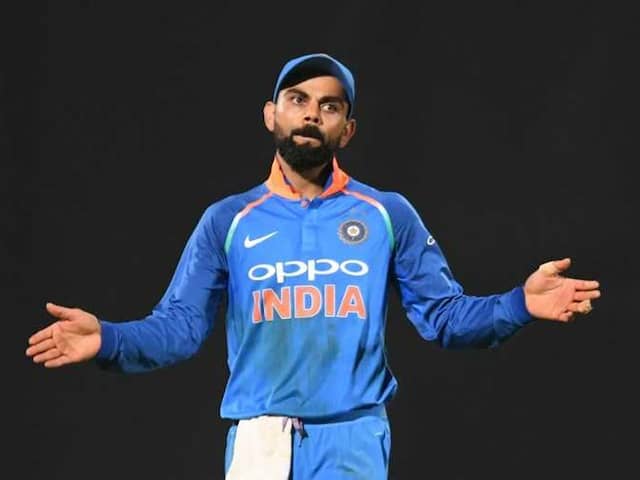 Virat Kohli's record third successive century went in vain as India were bowled out for 240.© AFP

Team India skipper Virat Kohli's 38th One-Day International (ODI) went in vain as a disciplined Windies side came back strongly to win the third match by 43 runs at the Maharashtra Cricket Association Stadium in Pune on Saturday. Chasing 284 to win, India looked on course with Kohli belting an excellent 107 off 119 balls, his third consecutive century of the series, and opener Shikhar Dhawan scoring 35 before a middle order collapse, coupled with some disciplined bowling bundled the hosts out for 240 in 47.4 overs. Disappointed by the loss, Kohli said that his team did not execute the plans well and that is why they ended on the losing side. "It was a pretty gettable total. We did not get the partnerships going, that does not happen too often. In the field we were fine. We didn't execute our plans to perfection," Kohli said in the post-match conference.

"We bowled pretty well. I think the wicket was not offering much in the first 35 overs. Later half it became difficult. From 227 for 8 we should have been chasing 250-260 at the maximum. The bowling effort was professional just that we give it away in the last 10 overs," he added.

"This Windies side is an explosive side and they can beat any team on a given day. They played better cricket and they deserve to win. Look when Hardik and Kedar both play, we get the extra option. When someone like Hardik is not playing, who gives you both bowling and batting option, it is difficult to get the balance," Kohli said.

For the Windies, veteran all-rounder Marlon Samuels turned out to be wrecker-in-chief, with his off-spinners, returning figures of 3/12 while skipper Jason Holder, Obed McCoy and Ashley Nurse picked two wickets each.

Earlier, the tourists rode Shai Hope's 113-ball 95 and a valuable 22-ball 40 from Nurse, lower down the order to put 283/9 at the end of their 50 overs. For India, pacer Jasprit Bumrah scalped four wickets in his comeback match.

The five-match ODI series is now deadlocked at 1-1 and all to play for at Brabourne in Mumbai.

Virat Kohli India vs West Indies 2018 Cricket India vs West Indies, 3rd ODI
Get the latest Cricket news, check out the India cricket schedule, Cricket live score . Like us on Facebook or follow us on Twitter for more sports updates. You can also download the NDTV Cricket app for Android or iOS.