Prithvi Shaw Says He Was Ready For Debut Even In England 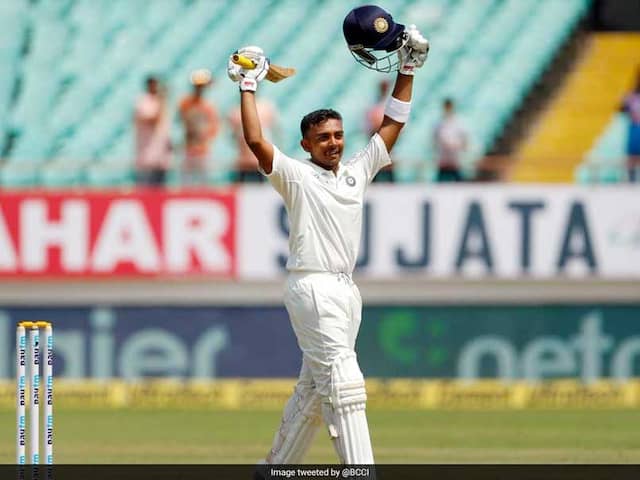 Prithvi Shaw announced his arrival in Test cricket by scoring his maiden century against the Windies during the first Test at the Saurashtra Cricket Association Stadium in Rajkot. Prithvi went on to score a memorable 134 runs before being dismissed by leg-spinner Devendra Bishoo. The 18-year-old was named in the squad for the final two Tests of India's tour of England but did not get to make his debut in a series which Virat Kohli and his men lost 1-4.

It was a dream debut for Shaw against the Windies in the series opener, as he also became the youngest Indian to reach the three-figure mark in his maiden appearance at the age of 18 years and 329 days.

"It was captain and coach's decision (of when to give me a game). I was ready in England as well but finally got the opportunity here," said the soft-spoken youngster after stumps on day one.

"But it I was a great experience in England. They made feel really comfortable. Virat bhai told me there is no senior or junior in the team. It was nice sharing the dressing room with players who have played international cricket for more than five years. Everyone is a friend now."

He was nervous before the game but getting to spend time with his senior teammates during the England series helped him approach his debut like "any other game".

His first runs came off his typical back-foot punch and he never looked back from there, playing a top-quality innings comprising 19 fours.

"I was nervous at the start but settled down after I timed a few nicely. After that, I didn't feel the pressure that I felt at the start of the innings. I like to dominate bowlers and that is what I was trying to do, waiting for the loose balls," he said.

Having scored a hundred on Ranji and Duleep Trophy debut, Shaw did the same at the highest level. When asked, Shaw was modest about rising to the occasion timing and again.

"I don't know how I manage but whenever go in the middle, I try to play to the merit of the ball and even in this game I went in with the same mindset. I did not try anything new thinking it is my first Test. Played the same way I have played India A and domestic cricket.

"Having said that, there is a lot of difference if you compare international cricket with the U-19 and domestic cricket. They come with a lot of strategies in international cricket. You face bowlers with a lot more pace. Sometimes you face serious pace in domestic cricket but here is a lot more variety and experience," said Shaw who looked comfortable against Shanon Gabriel even though he was touching 150kph.

The year could not have turned out better for Shaw, who led India to the U-19 World Cup title in New Zealand, made his IPL debut before finally getting his big break on Thursday.

He dedicated the hundred to his father, who raised him as a single parent after his mother passed way when he was just four.

"I never thought of making my India debut right after the U-19 win. I took it match by match. It finally happened today. I dedicate this innings to my father. He has made a lot of sacrifice for me. I cannot even describe it now.

"I was thinking about my dad, as he has sacrificed a lot for me. Whenever I scored a hundred I thought of him and this is my first Test hundred, it's all for him."

When asked what his father said to him before the game, Shaw added: "He doesn't know that much about cricket. He just said 'go and enjoy your debut'. Play like another game."