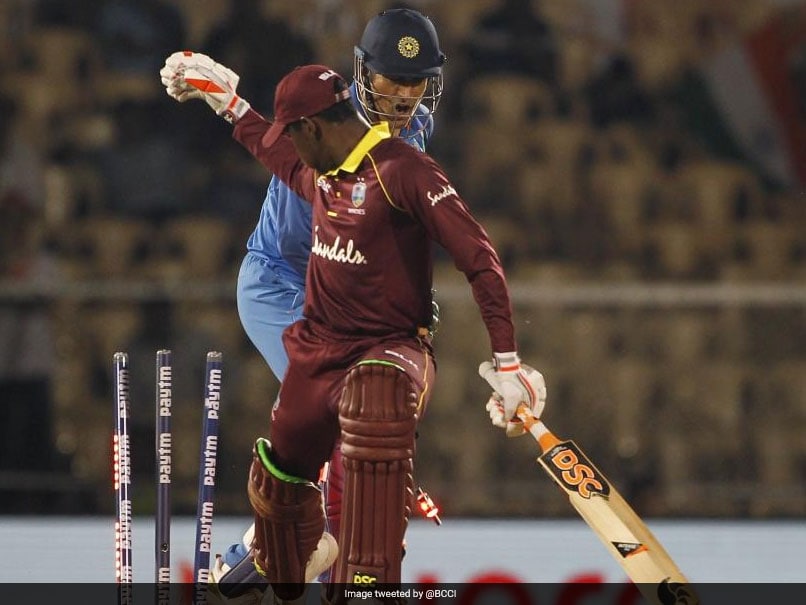 Former Indian cricket team captain MS Dhoni did not make the T20 team for the Windies and Australia series. Despite his waning age, his leadership qualities and lighting-quick wicketkeeping skills remain intact. In the fourth ODI against the Windies in Mumbai on Monday, MS Dhoni effected a stumping to dismiss Windies player Keemo Paul in only 0.08 seconds. His reflex behind the stumps even stumped bowler Ravindra Jadeja who thought the batsman wasn't out. However, the wry smile on MS Dhoni's face after the stumping ensured Ravindra Jadeja had got his man.

The stumping was 0.08seconds

The incident took place in the 28th over (27.5) when Keemo Paul was at the crease on 19. The ball was turning away from the batsman who failed to cover for the turn missing it on the forward push. A slight stride ahead of his crease and Keemo Paul sensed trouble as he knew right from the outset that Dhoni got his wicket.

Coming into this match after a comprehensive series-levelling victory over India in the third ODI, Windies were expected to at least give the hosts a fight. However, they failed miserably in all the three fronts. Rohit Sharma (162) and Ambati Rayudu (100) scored fine centuries after batting first. Their knocks helped had propelled India to 377/5 in their stipulated 50 overs. Chasing a big total, Windies could not stitch partnerships and were bundled out for 153 runs giving India a comprehensive 224-run victory on Monday.

India now lead the five-match ODI series 2-1. They play the Windies in the fifth and final ODI at Greenfield International Stadium, Thiruvananthapuram on Thursday.

Ravindra Jadeja Cricket India vs West Indies 2018
Get the latest updates on ICC T20 Worldcup 2022, check out the Schedule and Live Score. Like us on Facebook or follow us on Twitter for more sports updates. You can also download the NDTV Cricket app for Android or iOS.