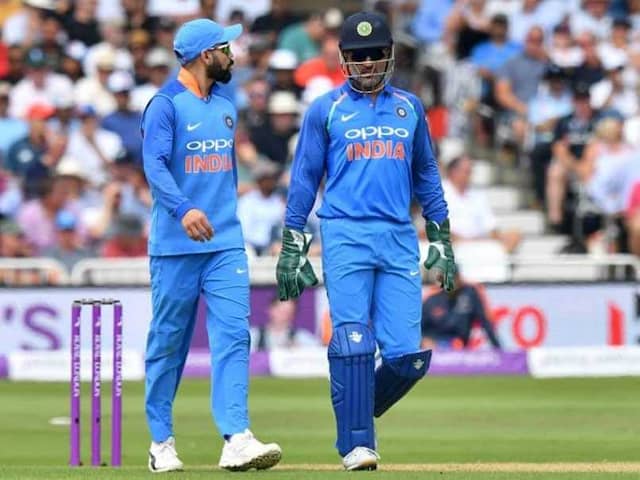 Virat Kohli and MS Dhoni will not feature in the T20I series against the Windies.© AFP

After comprehensively beating the Windies in the Test and the One-day International (ODI) series, Team India is all set to take on the Windies in the first match of the T20I series scheduled to be held at Eden Gardens in Kolkata on Sunday. India will be without Virat Kohli and MS Dhoni in the series. While Kohli was rested, Dhoni was left out of the T20I series against the Windies as well as Australia. Speaking on the absence of the Kohli and Dhoni from the T20I series, Carlos Brathwaite said that the visitors have a better chance of winning the series in the absence of the star duo but also insisted that his team is not taking the Rohit Sharma-led side lightly.

"Any team has a better chance if they don't play. They have loads of experience and quality. So Virat and Dhoni missing diminishes the quality. But that being said, there are still loads of quality in the Indian side. We won't be disrespecting them or take them lightly just because they are missing those two. Any team would miss Virat and Dhoni," Brathwaite said in the pre match press conference.

India comprehensively defeated the Windies in the final two matches of the ODI series. With momentum on their side, the team is all set for the first encounter in the shortest format against the reigning world T20I champions. When asked about the favourites in the series, Brathwaite said that the home team has the momentum and will be a difficult side to beat in home conditions.

"India at home in any format (are) very formidable. Especially with the advent of Indian Premier League (IPL) and the amount of T20 cricket that the Indian superstars play, I think they definitely start as favourites," Brathwaite added.

The Windies put up a better show in the ODIs with the Vizag one-dayer resulting in a tie followed by a win in Pune. With a young and vibrant team for the T20Is, Brathwaite is hoping his team can pull off a surprise.

"We have a new team, young exciting team and our Caribbean Premier League (CPL) stars are young and are raring to go. Some of them had a taste of it in the ODIs and I personally think we did a lot better than what a lot of people expected in the ODI format. We want to create an even bigger surprise in the T20s and come away with the trophy at the end of the series. We want at the end of the series it will be 8-2 in our favour (chuckles). But it's just different formats I guess," he added.

The first T20I between India and Windies will take place on Sunday at 19:00 IST.

Eden Gardens India vs West Indies 2018 India vs West Indies, 1st T20I Cricket
Get the latest Cricket news, check out the India cricket schedule, Cricket live score . Like us on Facebook or follow us on Twitter for more sports updates. You can also download the NDTV Cricket app for Android or iOS.