The Windies were struggling at 94 for 6 in their first inning after India ended at 649 for 9 declared. 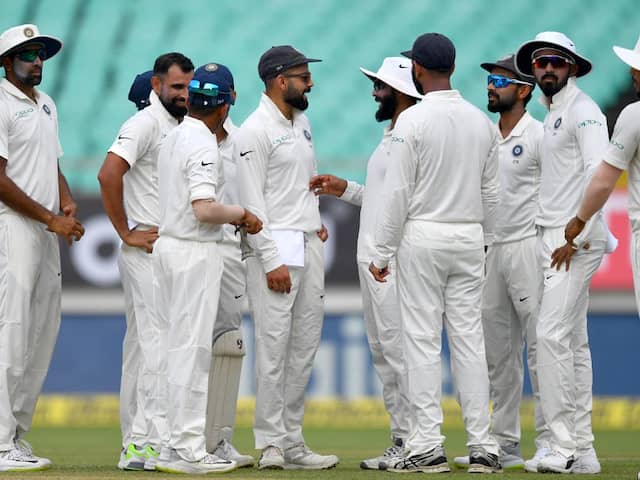 India displayed an all-around performance on the second day.© AFP

India displayed an all-around performance on the second day of the first Test to put visitors Windies on the back foot at the Saurashtra Cricket Association Stadium in Rajkot on Friday. India, resuming on the overnight total of 364/4, were boosted by Virat Kohli's 24th Test ton and Rishabh Pant's patient 92 to pile up runs against the Windies. Apart from Kohli and Pant, India all-rounder Ravindra Jadeja, who missed his maiden Test century in England, made the most of the opportunity as he too scored 100 not out off 132 balls, with India declaring at 649/9. The West Indies, who are without their captain Jason Holder, never looked in place as they ended Day 2 with a first innings score of 94/6, trailing India by 555 runs.

In response, the West Indies were in all sorts of trouble, first against pacer Mohammad Shami before the spinners cleaned up the middle order. They trail India by 555 runs and the hosts will fancy themselves to bowl them out twice by day three.

Shami bowled a fiery opening spell of four overs, conceding just five runs and removing acting captain Kraigg Brathwaite and Kieran Powell to leave the West Indies at two for seven in the fifth over. The West Indies were always going to find it tough against India, more so without their captain Jason Holder and senior pacer Kemar Roach.

Their sorry batting performance came after a forgettable outing with the ball as India piled on the runs.

By tea, Jadeja had struck an unbeaten 100 off 132 off balls to be the third centurion of the innings. His whirlwind effort in front of his home crowd came after skipper Kohli completed his 24th Test hundred in the morning.

Jadeja had to wait till his 38th Test to reach three figures, having made his debut back in December 2012. Playing with number eleven batsman Shami, he experienced the nervous 90s before finally getting to the milestone in the final over before tea.

It has been a good last 30 days for the southpaw, who scored a gritty 86 in the final Test in England before making an ODI comeback with the Asia Cup in Dubai.

Jadeja enthralled the sparse crowd at the SCA stadium with aerial hits which came mainly off the spinners. He ended up with five boundaries and as many sixes. India made 143 runs in the afternoon session, scoring at close to 4.5 runs an over.

Kohli did not last long post the lunch break and Jadeja gave the innings further impetus.

Kohli, who was 72 not out overnight, took time to knock off the 28 runs needed for yet another hundred while his partner Pant, who resumed at 17, went all guns blazing.

A second Test hundred in his fourth Test was for the taking but Pant, attempting another six over mid-wicket, failed to pick the googly and top-edged it for a simple catch to Keemo Paul at backward point. His entertaining innings was laced with eight fours and four sixes.

With Pant picking boundaries at will, Kohli was in no hurry get to the hundred and when he did get there, the India skipper became the second fastest to 24 Test hundreds behind only Donald Bradman, who took 66 innings to Kohli's 123.

Pant, who made his debut series in England memorable with a hundred, played his usual attacking game from ball one, flicking it nonchalantly through square leg to get going.

Kohli enjoyed his teammates' fluent strokeplay from the other end as Pant raced to his half century with a four and six off pacer Paul. He used his strong wrists to get to the desired elevation and distance. It was a display of brute power.

His eyes lit up when spinners were employed after first hour of the morning and welcomed Roston Chase with a four and six. He did the same to Devendra Bishoo in the following over.

Anything pitched up, he was quick to clear his one leg and deposit the ball over mid-wicket and mid-on.

The way Pant was plundering the bowlers, it seemed he would get to three figures before his skipper.

But that did not happen as Kohli completed his century with a flick off his pads towards fine leg.

Pant was on 87 when Kohli raised his bat but the wicket-keeper batsmen ended up throwing it away as he went for another six.

Ravindra Jadeja Prithvi Shaw Cricket
Get the latest Cricket news, check out the India cricket schedule, Cricket live score . Like us on Facebook or follow us on Twitter for more sports updates. You can also download the NDTV Cricket app for Android or iOS.