The Board of Control for Cricket in India (BCCI) called Rahul Dravid and head coach Ravi Shastri "two greats", which didn't please many fans on Twitter. 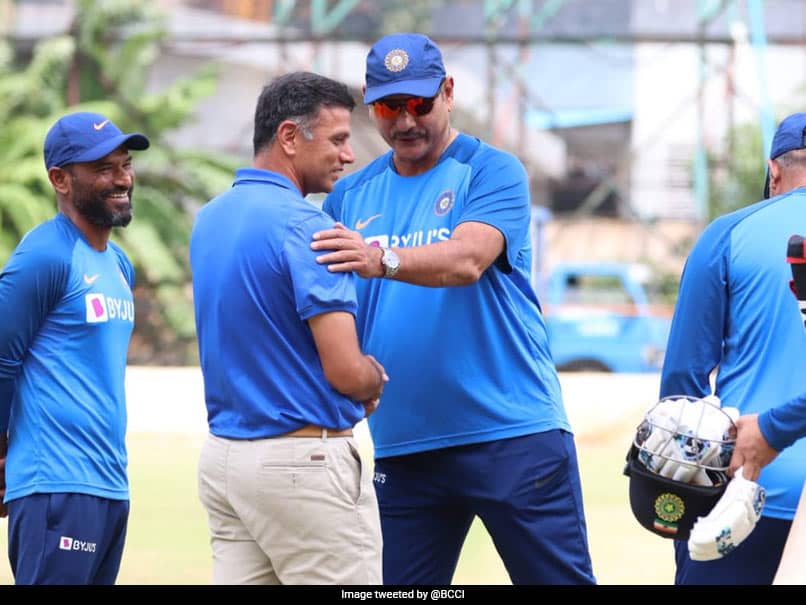 Ravi Shastri-coached India are currently 1-0 up in the three-match T20I series against South Africa.© AFP

Former India captain Rahul Dravid met current head coach Ravi Shastri during a practice session ahead of India's third T20 International against South Africa, to be played at M. Chinnaswamy Stadium in Bengaluru on Sunday. The Board of Control for Cricket in India (BCCI) shared the picture of the "two greats", but didn't get a positive response from the fans on social media. "When two greats of Indian Cricket meet," the BCCI captioned the image on Twitter.

The BCCI's idea of calling both Rahul Dravid and Ravi Shastri "greats" didn't go well among fans on Twitter and they flooded the post with their opinions.

"Only one hero my hero #TheWall #Legend #Dravid don't compare him with anybody," a user replied to the BCCI's tweet.

Another one joined in saying: "It seems you counted RAHUL & DRAVID as two different persons".

It seems you counted RAHUL & DRAVID as two different persons

Under the coaching of Ravi Shastri, India defeated the West Indies in all three formats and currently 1-0 up in the three-match T20I home series against South Africa.

On Wednesday, India captain Virat Kohli produced yet another masterful innings and remained unbeaten on 72 to help his team beat South Africa by seven wickets in the second Twenty20 International (T20I) in Mohali on Wednesday.

During his knock of 72 off 52 balls, the Indian skipper overtook Rohit Sharma to become the leading run-scorer in the shortest format of the game.

Needing 150 to win, India chased down the target in 19 overs to lead the three-match series 1-0 after the opening game was washed out.

Rahul Dravid Ravi Shastri India vs South Africa, 2019 Cricket
Get the latest updates on IPL 2021, IPL Points Table , IPL Schedule 2021 , live score . Like us on Facebook or follow us on Twitter for more sports updates. You can also download the NDTV Cricket app for Android or iOS.