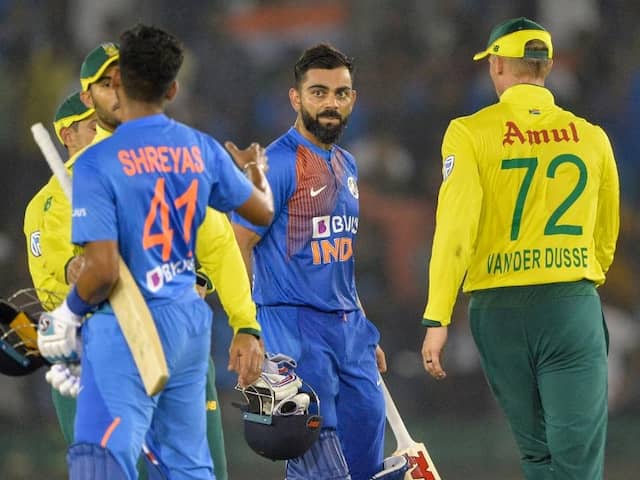 India vs South Africa: Virat Kohli will look to continue his sublime form in the 3rd T20I© AFP

India will look to seal the three-match Twenty20 International (T20I) series against South Africa with a win in Bengaluru. After the first match in Dharamsala was washed out without a single ball being bowled, Deepak Chahar and Virat Kohli helped India cruise to a comprehensive win over the Proteas in Mohali, giving them a 1-0 lead in the series. South Africa will be hoping to get their first win under Quinton De Kock's captaincy as they look to level the series but it will be tall task against an Indian team brimming with confidence.

Wicketkeeper-batsman Rishabh Pant will once again be under the scanner after a disappointing performance with the bat in Mohali. Pant, who was given a warning by India coach Ravi Shastri and batting coach Vikram Rathour about playing careless cricket, gave away his wicket cheaply in India's chase of 150. However, chairman of selectors MSK Prasad has backed the 21-year-old to come good.

Skipper Virat Kohli, who overtook Rohit Sharma as the highest run-getter in T20Is in the last match with a sublime unbeaten 72, will look to carry his form into the final game of the series.

Deepak Chahar, who impressed yet again with his bowling in the powerplay in the second T20I, will be looking to cement his place in the squad ahead of the ICC T20 World Cup to be held in Australia next year. The was India's best bowler in the last match, taking two wickets for 22 runs in his four overs.

Rishabh Pant Cricket
Get the latest updates on IPL 2020, check out the IPL Schedule for 2020 and Indian Premier League (IPL) Cricket live score . Like us on Facebook or follow us on Twitter for more sports updates. You can also download the NDTV Cricket app for Android or iOS.