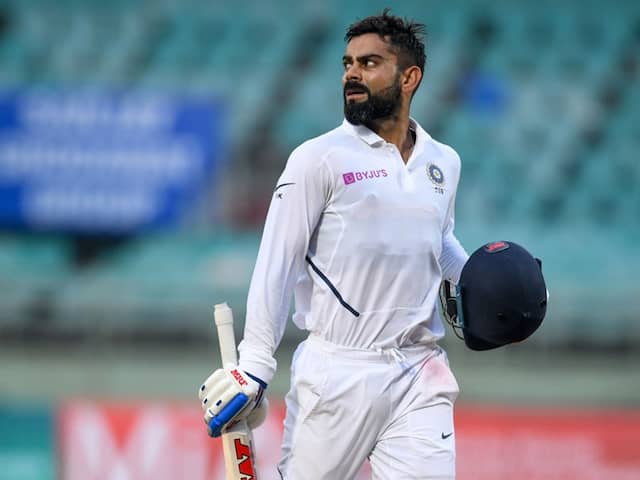 Virat Kohli scored his 26th hundred in the ongoing Test against South Africa in Pune on Friday. This was Virat Kohli's 69th international hundred across all formats. The India captain resumed his innings on Day 2 at 63 and was watchful in the beginning but sent the bad deliveries to the boundary. On the opening day, Virat Kohli was involved in a funny incident. In the 66th over, Kohli took a quick single by playing the ball towards the right of Kagiso Rabada, who was stationed at point. Rabada aimed at the stumps but missed his target by a big margin and the ball raced away for a boundary. Kohli, after getting four bonus runs, gave a thumbs up to the South African fielders.

Earlier, Mayank Agarwal displayed a batting masterclass as he brought up his second Test century.

Agarwal was hit on the helmet by a bouncer from debutant Anrich Nortje, but the opener came back strongly and smashed Nortje for three boundaries in an over.

Virat Kohli had won the toss and opted to bat but Rohit Sharma, the twin-centurion in the previous Test, could not replicate the batting masterclass displayed in Vizag. Kagiso Rabada's fierce pace and consistency were rewarded as Rohit Sharma was dismissed on 14 in the 10th over.

India are 1-0 up in the three-match series and will look to put a mammoth first innings total on the board in Pune.

South Africa Cricket Team India vs South Africa, 2nd Test Cricket
Get the latest updates on IPL 2020, check out the IPL Schedule for 2020 and Indian Premier League (IPL) Cricket live score . Like us on Facebook or follow us on Twitter for more sports updates. You can also download the NDTV Cricket app for Android or iOS.