Virat Kohli Celebrates 29th Birthday, Wishes Pour In From Around The World

Virat Kohli celebrated his 29th birthday with his teammates following the 2nd T20I between India and New Zealand. 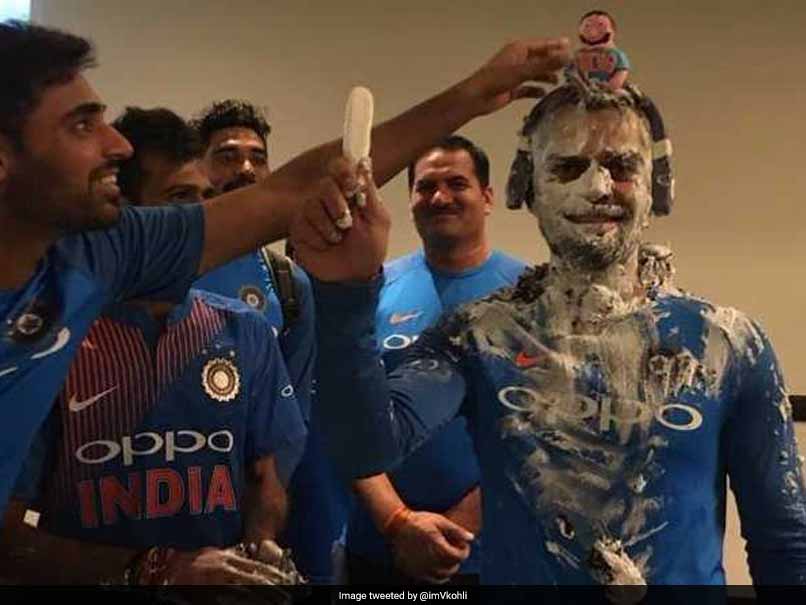 Virat Kohli's face and hair was smeared with cake by his teammates.© Twitter

Virat Kohli turned 29 on Sunday and celebrated his birthday with his teammates following the India vs New Zealand 2nd T20I in Rajkot. The Indian skipper might not have got his wish as India went down to the Kiwis but that didn't stop his teammates from smearing cake on his face and hair -- a celebration that has almost become a tradition in the Indian cricket team dressing room. Wishes poured in from around the world with people from all facets of life wishing the Indian captain on his 29th birthday. Not just former and present India cricketers, but players from other countries too tweeted their good wishes for Kohli.

#HappyBirthdayVirat :
Very warm birthday greetings to you @imVkohli; God bless you. One of my SandArts. pic.twitter.com/vb6yN27alN

He's India's charismatic captain and undoubtedly one of the finest batsmen in the world in all three formats. Happy Birthday @imVkohli! pic.twitter.com/jPHsqovnEy

@imVkohli Happy bday to one of the very best in the modern era.Have a great year ahead #StayBlessed pic.twitter.com/z0Swz6d5Xf

New Zealand opener Colin Munro played a brilliant unbeaten knock of 109 off 58 balls to power New Zealand's 40-run win over India in the 2nd T20I in Rajkot on Saturday night.

The Kiwi bowlers made sure the 197-run target was out of reach of India's famed batting line-up with some disciplined bowling.

Following the defeat,  Kohli applauded the visitors for their impressive win. He also conceded that his batsmen "were not good enough" on the day as they failed to dominate the New Zealand bowlers.

"Eventually, we were not good enough with the bat. When you are chasing 200, all the batsmen need to chip in, or one batsman has to keeping going at a 200 strike-rate. Tried to do my best. MS was very good at the end. But we were left with a very difficult task. It happens to a lot of batsmen, sometimes you are in good form, but you don't get enough balls," Kohli said.

Sponsored by Vuukle
Comments
Topics mentioned in this article
India Cricket Team New Zealand Cricket Team Virat Kohli India vs New Zealand Cricket
Get the latest updates on Fifa Worldcup 2022 and check out  Fifa World Cup Schedule, Stats and Live Cricket Score. Like us on Facebook or follow us on Twitter for more sports updates. You can also download the NDTV Cricket app for Android or iOS.