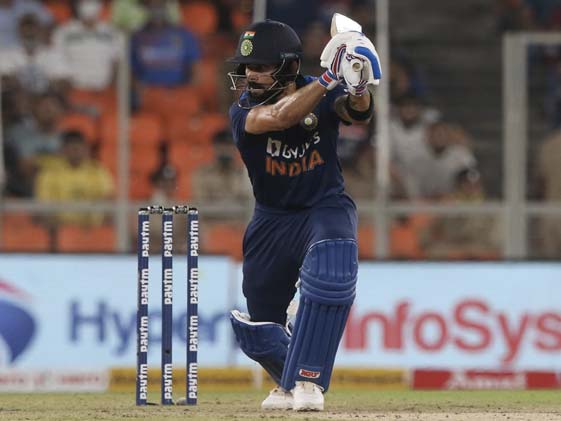 India captain Virat Kohli became the first batsman to make 3000 runs in men's T20I cricket. He achieved the feat in the second T20I between India and England in Ahmedabad on Sunday. Kohli was already the leading scorer in the format in men's cricket before the match. Only two other cricketers have scored more than 3000 runs in the format - both in women's cricket. Suzie Bates (3301 runs) of New Zealand and Stafanie Taylor (3062) of the West Indies are the others to achieve this feat.

Kohli's innings of 73 runs off just 49 balls with 5 fours and 3 sixes helped India level the five-match series 1-1 as they won the second T20I by seven wickets.

Set 165 runs to win the match, India chased down the target quite easily with more than two overs to spare.

India had lost the first T20I by eight wickets with their batsmen failing to execute their plans of playing an aggressive brand of cricket.

However, in the second match they executed those plans perfectly as debutant Ishan Kishan made a fifty at the top of the order.

Kishan went slam-bang right from the start even as he lost his opening partner KL Rahul for a duck.

He hit 56 off 32 balls with 5 fours and 4 sixes and helped India make the most of the Powerplay.

Rishabh Pant then smashed 26 off 13 to take the match out of England's grasp.

Virat Kohli India vs England, 2nd T20I India vs England 2020-21 Cricket
Get the latest updates on Fifa Worldcup 2022 and check out  Fifa World Cup Schedule, Stats and Live Cricket Score. Like us on Facebook or follow us on Twitter for more sports updates. You can also download the NDTV Cricket app for Android or iOS.