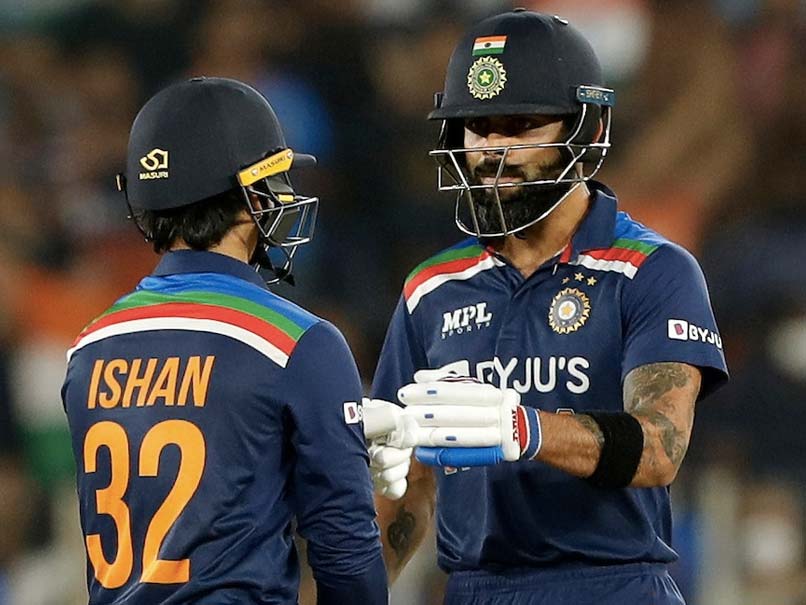 Virat Kohli slammed the winning six to seal a win for India against England in the second T20I of the five-match series, at the Narendra Modi Stadium. In reply to England's target of 165 runs, captain Kohli scored an unbeaten knock of 73 in 49 balls, to help India reach 166 for three in 17.5 overs. The hosts had a poor start to their chase, losing KL Rahul for a duck. But after the arrival of Kohli, India began to gain momentum and also saw the skipper stitch together a partnership with debutant Ishan Kishan. Kishan also registered a half-century (56 off 32 balls), before getting dismissed. Rishabh Pant also made a noteworthy contribution of 26 runs, with Shreyas Iyer (8) remaining unbeaten with Kohli. The visiting bowlers couldn't really find their footing in the second T20I, with Sam Curran, Chris Jordan and Adil Rashid registering a wicket each. Earlier, the visitors could only muster 164 for six in 20 overs, with Jason Roy (46 off 35) once again missing out on a half-century. For India's bowling department, Washington Sundar and Shardul Thakur were in top form, registering two wickets each. Meanwhile, Bhuvneshwar Kumar and Yuzvendra Chahal took a dismissal each. The win has also helped India level the series at 1-1, with the third T20I scheduled for March 16. (SCORECARD)

Jofra Archer India vs England 2020-21 Live Score Live Cricket Score Cricket India vs England, 2nd T20I Live Blogs
Get the latest updates on ICC T20 Worldcup 2022 and CWG 2022 check out the Schedule, Live Score and Medals Tally. Like us on Facebook or follow us on Twitter for more sports updates. You can also download the NDTV Cricket app for Android or iOS.