India vs England: Prasidh Krishna returned 4 for 54 in the first ODI in Pune. It was the best bowling performance for an Indian debutant in ODIs. 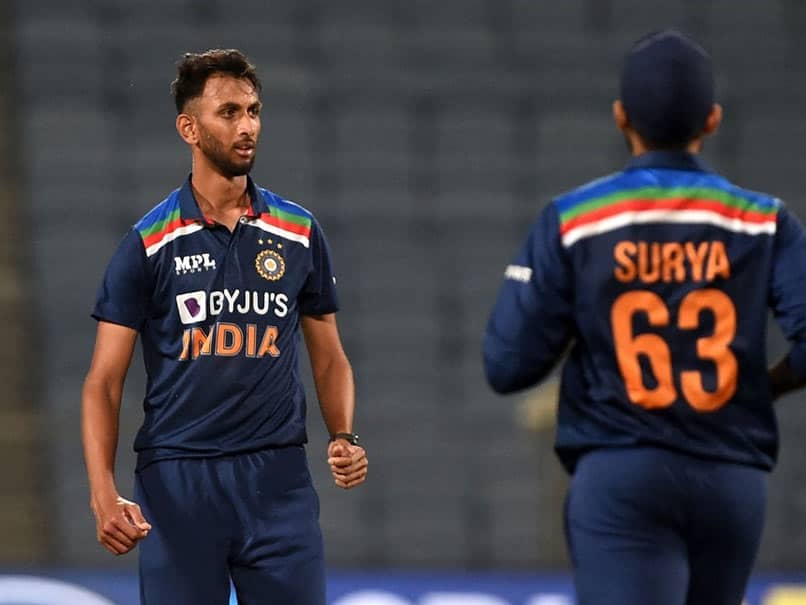 Prasidh Krishna returned the best bowling figures for India on debut in ODI cricket as he finished with 4 for 54 from 8.1 overs in the first ODI against England in Pune on Tuesday. Krishna received his maiden call-up to the Indian team ahead of the ODI series and made the most of the opportunity handed to him in the first match. He dismissed Jason Roy, Ben Stokes, Sam Billings and Tom Curran to help India to a 66-run victory and a 1-0 lead in the three-match series.

Krishna was expensive in his first spell as he was taken for boundaries by the England opening pair of Roy and Jonny Bairstow.

However, the debutant made a strong comeback thereafter by dismissing Roy in the 15th over to break a mammoth 135-run opening stand, and then got Stokes caught inside the circle in front of square to land England a double-blow.

As the game was evenly poised in the 32nd over with England 217 for 5, Krishna returned to get Billings caught by Virat Kohli to hand India a crucial breakthrough.

Krishna also picked up the last wicket to fall in the match, forcing Curran to hole out to Bhuvneshwar Kumar, another bowler that excelled on the night with figures of 2 for 30 in 9 overs.

Krishna's 4 for 54 helped him go past Noel David, who had returned 3 for 21 in debut against the West Indies in Trinidad in 1997 and until this match had held the record for the best figures for a debutant for India in ODIs.

Varun Aaron's 3 for 24 against England in Mumbai in 2011 is third on the list of best bowling spells for India on ODI debut.

England Cricket Team Prasidh Krishna India vs England 2020-21 India vs England, 1st ODI Cricket
Get the latest updates on IPL 2021, IPL Points Table , IPL Schedule 2021 , live score . Like us on Facebook or follow us on Twitter for more sports updates. You can also download the NDTV Cricket app for Android or iOS.