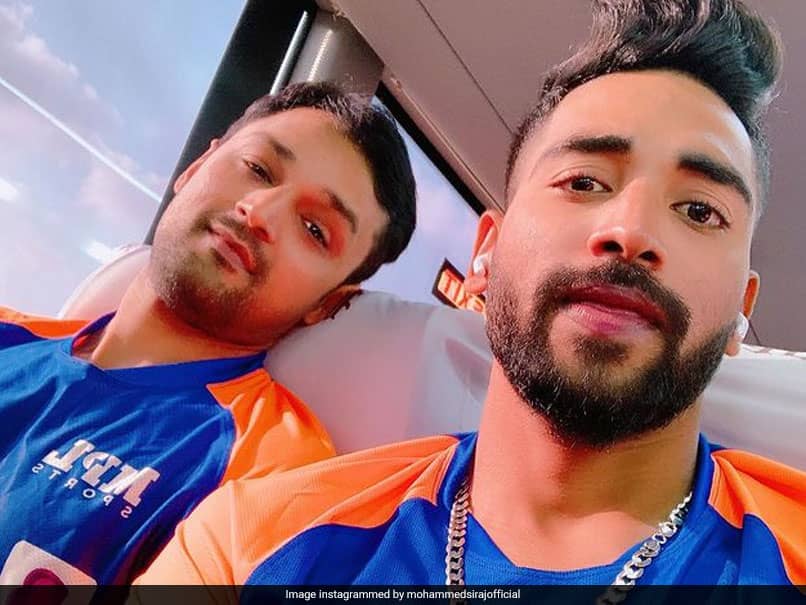 Mohammed Siraj posed with Shahbaz Nadeem and called his teammate a "partner in crime."© Mohammed Siraj/Instagram

Mohammed Siraj, one of the heroes of India's historic series win in Australia last month, got ready for the upcoming Test series against England in Chennai where Team India practised at the MA Chidambaram Stadium on Monday. He posed with teammate Shahbaz Nadeem for a picture and captioned is as "Partner in crime." Siraj and Nadeem play for Hyderabad and Jharkhand respectively in Indian domestic cricket. While Siraj is in the squad after his exploits with the ball in Australia, Nadeem has been included as a standby player.

Siraj returned 13 wickets from three Tests in Australia as India won the Border-Gavaskar series 2-1 after winning the fourth and final Test in Brisbane.

Siraj picked up his maiden five-wicket haul in the Brisbane Test, having made his debut in the longest format in the second Test of the series in Melbourne.

The 26-year-old fast bowler has 165 wickets from 41 first-class matches at 23.92 and he could play his first Test in India when the team takes the field in Chennai for the first England Test on Friday.

Nadeem made his Test debut in 2019 against South Africa in Ranchi and returned four wickets in the match.

Nadeem, a left-arm orthodox spinner, has 443 wickets from 117 first-class matches.

The second Test of the upcoming series will also be played in Chennai before the teams move to Ahmedabad for the remaining two Tests.

Ahmedabad will also host the five scheduled T20Is between the teams and the tour concludes in Pune with three ODIs.

Shahbaz Nadeem Mohammed Siraj India vs England 2020-21 Cricket
Get the latest updates on IPL 2021, IPL Points Table , IPL Schedule 2021 , live score . Like us on Facebook or follow us on Twitter for more sports updates. You can also download the NDTV Cricket app for Android or iOS.