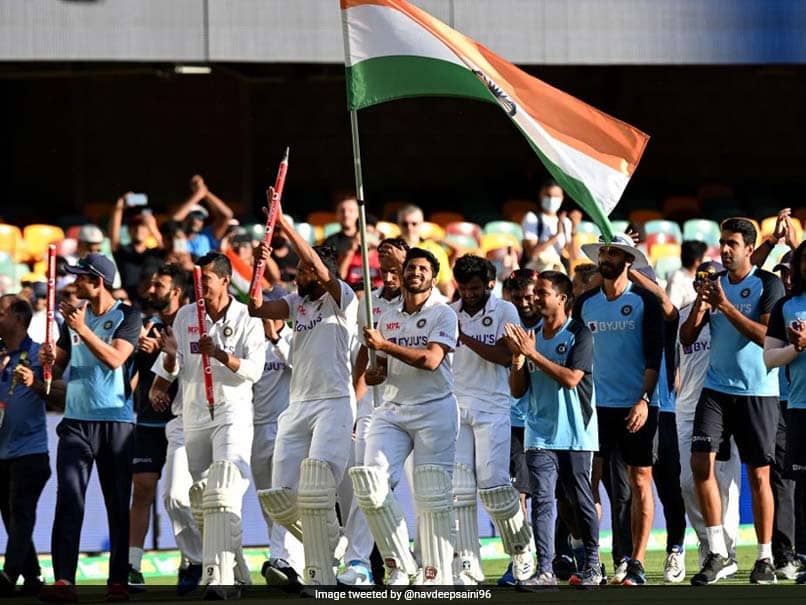 Union Finance Minister Nirmala Sitharaman on Monday recalled the joy that the entire country felt while watching Team India's historic win over Australia in the Border-Gavaskar Trophy under trying circumstances earlier this year. Sitharaman, who was giving her 2021-22 Budget Speech, started off by giving a special shout out to what the Indian team under the leadership of Ajinkya Rahane managed to achieve Down Under. "I cannot help but recall the joy that we as a cricket-loving nation felt after Team India's recent spectacular success in Australia. It has reminded us of all the qualities that we as people, particularly our youth, epitomise of having abundant promise and the unsuppressed thirst to perform and to succeed," said Sitharaman while lauding Team India.

This comes a day after Prime Minister Narendra Modi hailed the Indian cricket team for their Test series win against Australia, saying that the team's hard work and teamwork were inspiring.

During his Mann Ki Baat radio programme on Sunday, Prime Minister Modi said: "This month, we got good news from the cricket pitch. After initial hiccups, the Indian team bounced back gloriously and won the series in Australia. Our team's hard work and teamwork were inspiring."

Team India's head coach Ravi Shastri then said that the encouraging words by Prime Minister Modi will further strengthen the cricket team and the resolve to perform under pressure.

"Thank you, Sir. Your kind words will further strengthen #TeamIndia and the country's resolve to perform under pressure and in trying circumstances. Jai Hind," Shastri tweeted.

On January 19, Australia's fortress -- The Gabba -- was finally breached. It took 32 years and two months, but the unthinkable was achieved after an injury-ravaged young Indian team defeated Australia by three wickets against all odds in the fourth Test to win the series 2-1.

The last time a visiting team came out triumphant at The Gabba was back in November 1988 when the West Indies, under the leadership of Viv Richards, thrashed Allan Border's team by nine wickets.

India had been bundled out for 36 in Adelaide and the side stumbled to an eight-wicket loss.

Skipper Virat Kohli also returned home after being granted a paternity leave, but under Rahane, the team showed remarkable fight and resolve to win the series.

The visitors were also hampered by injuries throughout the tour, but this did not hamper the spirits of the team as a young side emerged triumphant in the final Test at the Gabba.

India's memorable win had also ensured that they topple Australia in the ICC Test Team Rankings to claim the second spot.

Virat Kohli Australia vs India 2020-21 Cricket
Get the latest updates on IPL 2021, IPL Points Table , IPL Schedule 2021 , live score . Like us on Facebook or follow us on Twitter for more sports updates. You can also download the NDTV Cricket app for Android or iOS.