PM Narendra Modi, on his 'Mann Ki Baat' address, praised the Indian team's grit and resolve and the way players fought back to clinch a series win in Australia, after "initial hiccups". 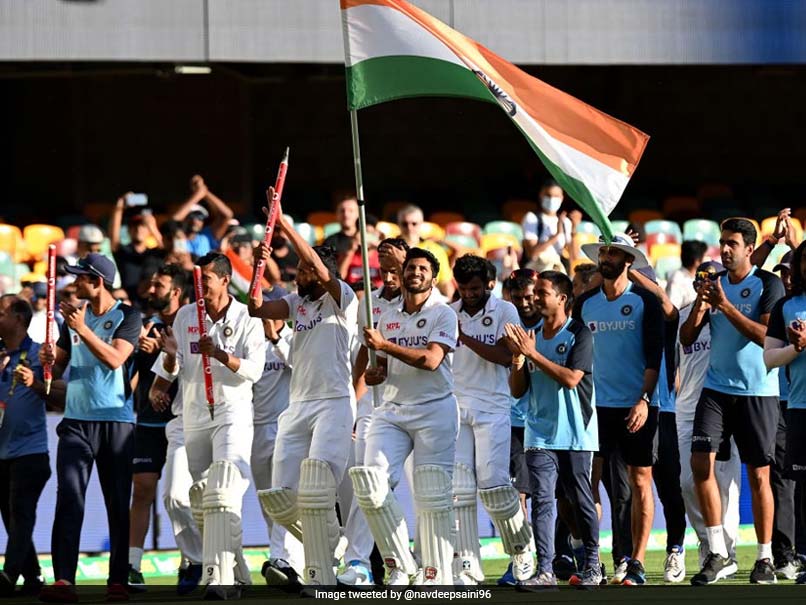 India became the first team since 1988 to beat Australia in a Test match at the Gabba.© Twitter

Indian cricket team head coach Ravi Shastri thanked PM Narendra Modi for his "kind words" about Team India's memorable Test series against Australia in their own backyard while India captain Virat Kohli tweeted the national flag as he too reacted to PMO India's tweet. PM Modi, on his 'Mann Ki Baat' address, praised the Indian team's grit and resolve and the way players fought back to clinch a series win in Australia, after "initial hiccups". "This month, we got good news from the cricket pitch. After initial hiccups, the Indian team bounced back gloriously and won the series in Australia. Our team's hard work and teamwork was inspiring," PM Modi said during his 'Mann Ki Baat' speech as tweeted by PMO India.

Thanking PM Modi, Shastri said that his kind words will further motivate the team to perform even better under pressure, no matter how difficult the circumstances.

"Thank you, Sir. Your kind words will further strengthen #TeamIndia and India's resolve to perform under pressure and in trying circumstances. Jai Hind!" Shastri wrote, in response to a tweet put out by the PMO India.

Thank you, Sir. Your kind words will further strengthen #TeamIndia and 's resolve to perform under pressure and in trying circumstances. Jai Hind ! https://t.co/yQQN9nh8Ab

BCCI president Sourav Ganguly, who was discharged from Kolkata hospital on Sundayafter his second heart operation, also expressed his gratitude to PM Modi for recognising Indian cricket team's remarkable achievement Down Under.

Sincere thanks and gratitude to Honourable Prime minister for recognising the performance of the Indian cricket team in australia..

Thank you for your words of encouragement Shri @narendramodi Ji It's always an honour to represent our country, we hope to continue inspiring more Indians as we move forward https://t.co/8vxfrU3N4v

Thank you for your kind words sir. https://t.co/m6whAG0GAc

Thank you so much to Honourable Prime minister for appreciating the performance of the Indian cricket team in australia. Keep supporting us and we are proud to be a part of Indian Cricket Team #TeamIndia #MannKiBaat https://t.co/bkKQ1X12SS

India began the four-match series with a disappointing loss within three days after they scored their lowest-ever total in Test cricket in the second innings.

However, Indian players rose to the challenge in the following games and played with great intent, in both departments.

Ajinkya Rahane, captaining the side in regular skipper Virat Kohli's absence, led by example scoring a hundred in Melbourne as India defeated Australia by eight wickets in the second match.

With odds stacked against them in the third Test, Hanuma Vihari and Ravichandran Ashwin both battled injuries, showing great resilience to save the match, by playing out close to 50 overs on the final day.

In the final Test, Team India played without several main players who were ruled out due to injuries.

But an unheralded Indian team managed to do what no other side could in last 32 years -- beat Australia in a Test match at the Gabba.

The win in Brisbane helped India retain the Border-Gavaskar Trophy after overcoming all the hurdles.

Ajinkya Rahane Australia vs India 2020-21
Get the latest updates on Fifa Worldcup 2022 and check out  Fifa World Cup Schedule, Stats and Live Cricket Score. Like us on Facebook or follow us on Twitter for more sports updates. You can also download the NDTV Cricket app for Android or iOS.