India vs England: Eoin Morgan said fast bowler Jofra Archer's return to the IPL will depend on the assessment by England's medical staff. Archer was ruled out of the ODI series with an elbow injury. 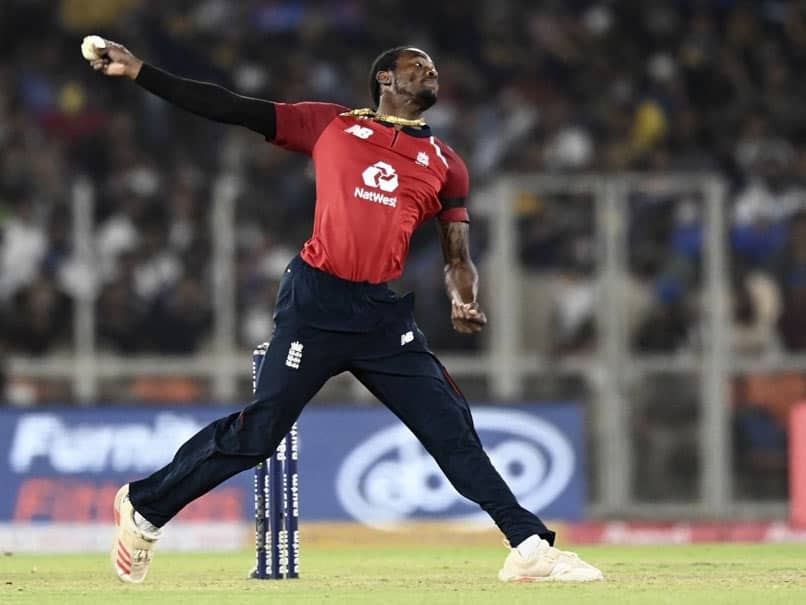 IND vs ENG: Jofra Archer was ruled out the three-match ODI series with an elbow injury.© AFP

England limited-overs skipper Eoin Morgan on Monday said that the medical staff would determine whether Jofra Archer would return to India to play the Indian Premier League (IPL) at some stage this year. Morgan's remark came as Archer was deemed unfit for the upcoming three-match ODI series against India. The pacer has also been ruled out from the initial phase of the Indian Premier League (IPL) 2021. "To be honest, I cannot give a medical opinion. We know the situation with his elbow, it has progressively gotten worse. We know that it needs investigation, only time will tell. He has given his heart and soul to us since he has been involved so we will give him full attention in order to try and bring the best result possible," said Morgan during a virtual press conference on Monday.

"It all depends on the outcome of the investigation that the medical team will do (Archer's return to India for IPL). They will determine the best rehabilitation programme coming back and we will go from there. We fully trust our medical team, they have outstanding regarding player welfare and player rehabilitation. The trust is always there," he added.

Archer is returning to the UK for further management and investigation of his right elbow injury.

Archer's elbow issue has deteriorated over the course of the five-match T20I series and made it increasingly challenging for him to maintain performance levels.

The ECB medical team will now assess the player and, together with Archer, develop a treatment plan and a return-to-play schedule in due course. As a consequence, Archer will miss the start of this year's IPL.

When asked about the ODI series against India, Morgan said: "We have plenty of options, we are spoiled for choice. Throughout the ODI series, you will (see) guys get an opportunity more so than we did in the T20I series so yeah, it is going to be exciting.

"Playing three ODIs on the same ground against a very strong Indian side, it is a huge opportunity for everyone to go out there and get in the 50-over format.

"ODI series win is not a consolation prize, this is a huge opportunity for the guys who have been here on the fringes. When you score the runs or take wickets away from home, there is a huge incentive to try and push your case forward.

"We have ODI Super League points at stake to qualify for the next World Cup."

Answering a question whether England would look to play ODIs as an extension of T20 cricket, Morgan said: "I don't think there is a strong enough argument. I think given that the 50-over format has been probably as close to T20, there are certain familiar scenarios that work themselves out.

"There are pockets of the game that replicate T20 cricket. There is a very limited change between both squads, guys are skilled enough to play both formats even though it is T20 World Cup year."

On Saturday, blistering half-centuries by skipper Virat Kohli and Rohit Sharma and spirited bowling performance by Indian bowlers helped the hosts register a 36-run win in the fifth T20I at the Narendra Modi Stadium.

With this win, India clinched the five-match series 3-2 and now both teams will face off in the three-match ODI series, beginning Tuesday in Pune.

Jofra Archer India vs England 2020-21 Cricket
Get the latest updates on IPL 2021, IPL Points Table , IPL Schedule 2021 , live score . Like us on Facebook or follow us on Twitter for more sports updates. You can also download the NDTV Cricket app for Android or iOS.