India vs England: India toppled England in the high-scoring fifth and final T20I to claim the five-match series 3-2 on Saturday 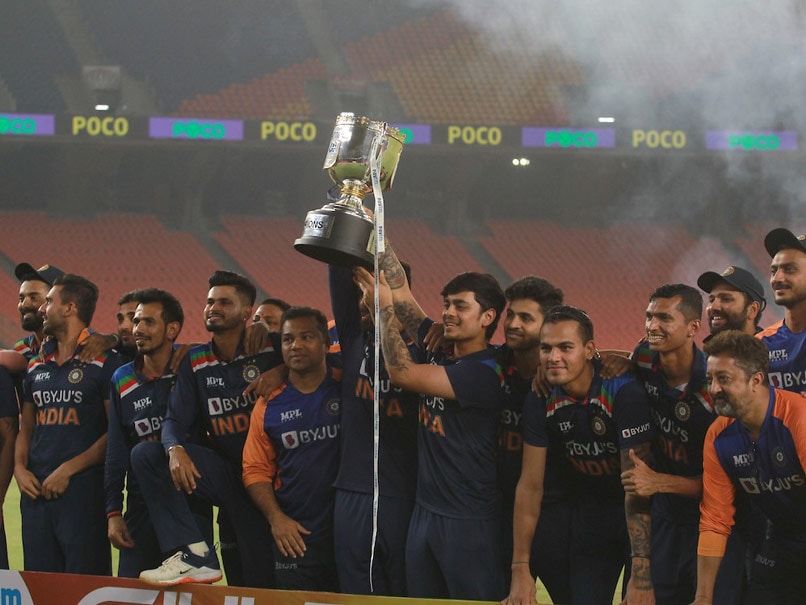 India defeated England by 36 runs in the fifth and final T20I to clinch the 5-match series.© BCCI

Dishing out a dominating all-round show, India toppled England in the high-scoring fifth Twenty20 International to not only claim the series 3-2 but also prove that their preparations for the T20 World Cup are moving in the right direction. Rohit Sharma's sensational 64 off 34 balls and skipper Virat Kohli's unbeaten 80off 52 balls powered India to a massive 224 for two, their best ever total against England, after the visitors won the toss for the fourth time in the series and opted to field on Saturday.

In the run chase, Jos Buttler (52 off 34) and Dawid Malan (68 off 46) kept India on the edge with a threatening 130-run stand but England's challenged fizzled with the fall of the wicketkeeper-batsman in the 13th over bowled by Bhuvneshwar Kumar.

England's innings eventually ended at 188 for eight as they lost match by 36 runs.

The dew was a factor in the second innings but the Indian bowlers overcame that to defend the target on a batting beauty.

Bhuvneshwar was impressive in his comeback series and saved his best for the decider to end with two wickets for 15 runs in four overs.

Apart from Bhuvneshwar's successful return from injury, the big plus for India was the emergence of Suryakumar Yadav and Ishan Kishan.

Hardik Pandya was back to bowling regularly, marking another positive for Kohli's team which proved in the series that it can win while chasing as well as batting first.

England were dealt a big blow at the start of the daunting chase with Bhuvneshwar castling Jason Roy's stumps with an inswinger.

However, incoming batsman Malan ensured the required big hits kept coming and in the company of the dangerous Buttler, took England to 104 for one in 10 overs.

Malan, the world number one batsman, who did not fire earlier in the series, was in his elements. His off side play was the highlight of his innings which comprised nine fours and two sixes.

The momentum shifted decisively in India's favour when Buttler holed out at long off with Bhuvneshwar conceding only three runs in that over.

Buttler's dismissal also fired up Kohli, who was involved in an exchange with the opposition players, something that needed umpire's intervention.

Earlier, preparing themselves for success in all conditions ahead of the World Cup, India thrived under the pressure of a series-decider to produce their batting performance of the series.

Jofra Archer and Mark Wood had troubled the Indians with their extra pace in earlier games but Rohit and Kohli sent them to the cleaners on way to their 94-run stand off 54 balls.

The other major contributions came from Suryakumar Yadav (32 off 17 balls) and Hardik Pandya (39 not out off 17 balls). The hosts hammered 67 runs in the last five overs to give the innings a perfect finish.

Barring Ben Stokes and Adil Rashid, all England bowlers leaked more than 10 runs per over with Chris Jordan (0/57) being the most expensive.

India decided to drop opener KL Rahul to accommodate an extra bowling option in left-arm pacer T Natarajan for the all important game.

With no Rahul at the top, Virat Kohli moved himself up the order to open with Rohit, a move that worked wonders.

Rohit did the bulk of the scoring in their partnership as Kohli was more than happy to enjoy a sensational display of stroke-making from the other end.

Rohit, who was rested for the first two games and did not get much in the next two, enhanced his reputation of a big match player on Saturday.

Most of his five sixes were his trademark shot, the seemingly effortless pull over deep square leg. Also a treat to the eye were his rasping straight drives off a seriously quick Mark Wood in his first over.

Kohli too pulled Wood into the stands, a shot that got him fully pumped up. As Kohli paced his innings beautifully at the other end, he had the company of a supremely confident Suryakumar, who carried on from where he left in his debut game. Kohli then partnered with Hardik to get India past 200.

Bhuvneshwar Kumar India vs England 2020-21 Cricket India vs England, 5th T20I
Get the latest updates on ICC T20 Worldcup 2022 and CWG 2022 check out the Schedule, Live Score and Medals Tally. Like us on Facebook or follow us on Twitter for more sports updates. You can also download the NDTV Cricket app for Android or iOS.