India vs England: Ajinkya Rahane fell to a remarkable one-handed catch by Joe Root in the second session on Day 3. 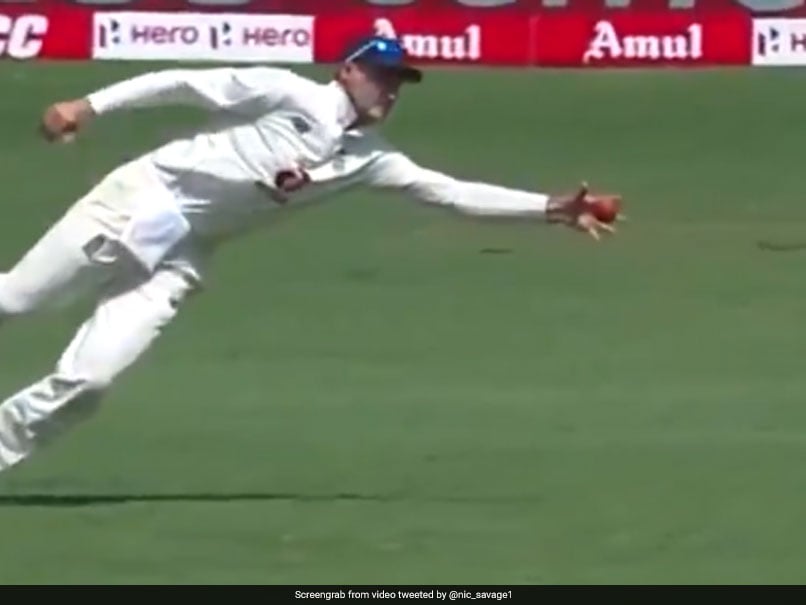 England captain Joe Root took a one-handed stunner to dismiss India batsman Ajinkya Rahane on Day 3 of the first Test in Chennai. Replying to England's mammoth 578, India were in trouble in the second session of the day as they lost captain Virat Kohli and his deputy Rahane in quick succession. Rahane stepped out to a delivery from off-spinner Dom Bess and drove uppishly. Root, stationed at cover, leapt to his left and took a one-handed catch that had the England players ecstatic.

Root couldn't do anything wrong in the Test as after hitting a magnificent 218 in his 100th Test. He made the right bowling changes and field placements and topped it all with a spectacular catch.

Rahane's dismissal meant India were reduced to 73 for 4.

After taking the remaining two England wickets on the third morning of the Test, India lost four of their top five batsmen inside two sessions.

Rohit Sharma edged behind to the 'keeper while Shubman Gill was also a victim to a superb piece of effort in the field by an English player, this time James Anderson.

Gill drove a full ball by Archer towards mid-on, and Anderson leapt to his left and took a catch inches off the ground to put India two down.

Kohli was dismissed by Bess for 11 and when Rahane fell a few moments later, India were in all kinds of trouble.

The four-match Test series has the second Test scheduled at Chennai followed by the last two in Ahmedabad.

Ajinkya Rahane Dom Bess India vs England 2020-21 Cricket
Get the latest updates on SA vs IND 2021-22, check out the Schedule and Live Score . Like us on Facebook or follow us on Twitter for more sports updates. You can also download the NDTV Cricket app for Android or iOS.