India vs England: The Indian cricket team hit the nets for the first time on Tuesday since completing their quarantine and coach Ravi Shastri welcomed the players with a "rousing address". 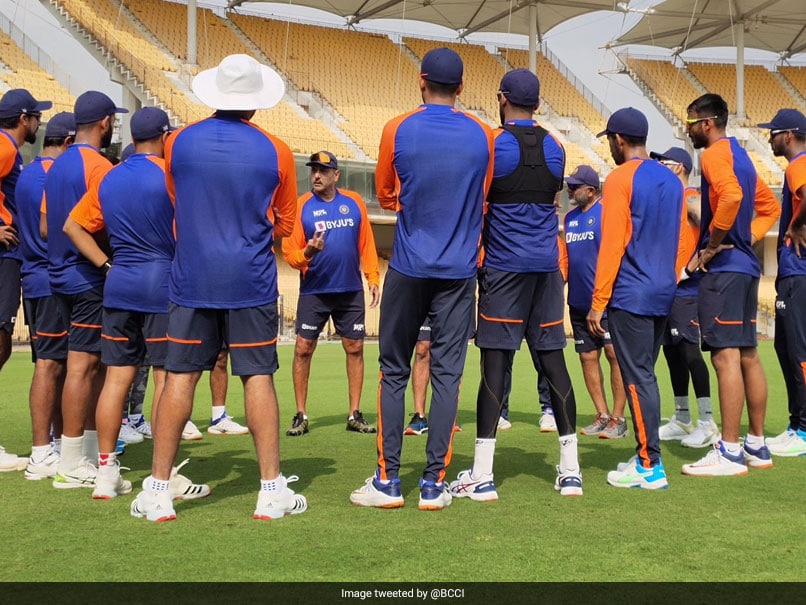 IND vs ENG: Ravi Shastri welcomed the players with a "rousing address" as Team India hit the nets.© BCCI/Twitter

Team India stepped up their preparations for the first Test against England starting February 5 with their first net session on Tuesday in Chennai. Head coach Ravi Shastri was seen addressing the players who huddled around the coach at the MA Chidambaram Stadium. "Day 1 of our nets session in Chennai and it is Head Coach @RaviShastriOfc who welcomes the group with a rousing address," the Board of Control for Cricket in India (BCCI) said in a tweet and posted two pictures of the team huddle.

Day 1 of our nets session in Chennai and it is Head Coach @RaviShastriOfc who welcomes the group with a rousing address. #TeamIndia #INDvsENG pic.twitter.com/eueKznxrMa

Earlier on Monday, the Indian players took to the ground for the first time after completing their quarantine and returning negative COVID-19 tests.

The second Test of the series will also be played in Chennai and is due to begin on February 13.

The last two Tests of the series will be played in Ahmedabad and the BCCI is considering allowing fans inside the stadia for the three fixtures.

"We have spoken to the BCCI, we will get official approval for 50 per cent fans by today evening," Ramasaamy had said on Monday.

The Tests will be followed by five T20Is - all in Ahmedabad at the new Motera Stadium - and three ODIs in Pune.

The England team completed their quarantine as well on Monday and all players returned negative results. They are due to train for the first time as a group on Tuesday.

India Cricket Team Ravi Shastri India vs England 2020-21 Cricket
Get the latest updates on ICC Women's Cricket World Cup 2022 and IPL 2022, check out the Schedule , Live Score and IPL Points Table. Like us on Facebook or follow us on Twitter for more sports updates. You can also download the NDTV Cricket app for Android or iOS.