India vs England: Mark Wood said England fast bowlers had been excited by their early experience with the pink ball that will be in use next week during the day-night Test against India. 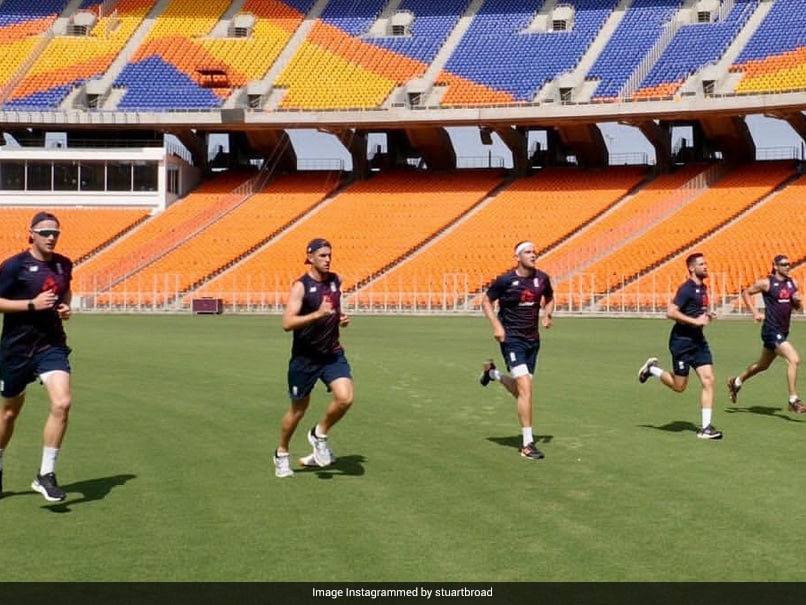 IND vs ENG: England players train ahead of the third Test against India in Ahmedabad.© Instagram

England fast bowlers are "dying to get" their hands on the pink ball ahead of the day-night third Test against India, fast bowler Mark Wood said on Friday. With the four-match series level at 1-1, the teams will play their first floodlit Test against each other in next week's inaugural match at Ahmedabad's new 1,10,000-capacity Sardar Patel Motera Stadium.

Floodlit fixtures are renowned for assisting quick bowlers, with India's pacemen taking all 20 Bangladesh wickets to fall in their only previous day-night home Test, against Bangladesh in Kolkata 14 months ago.

And Wood said England's seamers had been excited by their early experience with the pink ball that will be in use next week.

"We've been bowling with them in the nets -- they have swung quite a bit and they've lasted longer, which was interesting to see," Wood told a conference call.

"With the ball, as soon as it moves, every one of the bowlers from the past couple of months is dying to get it in their hand."

England have the bowlers to exploit floodlit conditions even if Wood, back with the squad after being rested for the first half of the series, does not play.

They could deploy both James Anderson and Stuart Broad, rather than field one or other of England's two all-time leading wicket-takers as has been the case in recent Tests.

Jofra Archer is another option if fit following the elbow injury that ruled the fast bowler out of England's 317-run loss in the second Test in Chennai, while Olly Stone, who performed creditably in that match, and Chris Woakes are also in the squad.

"As soon as the ball moves we know how good our seam bowlers can be," said Wood.

"We've got good depth there, good skills and two of the best ever (Anderson and Broad)," added the 31-year-old Durham quick.

Wood explained why he had withdrawn from Thursday's Indian Premier League auction.

But Wood, who has played just 18 red ball internationals in a six-year Test career blighted by ankle injuries, explained that making time for his family and keeping himself fit in a year where England have a packed schedule were his priorities.

"It's life-changing money, which is why it was such a difficult decision for me," he said.

"First and foremost it was for my family. I'm going to spend six weeks here in India and it would have been another eight weeks on top of that.

"The second reason, of course, is being ready for England. I don't want my body to fail me or be a bit bruised mentally or physically for the back end of the year when it's the (T20) World Cup and Ashes, or in the summer when it's a big series against India at home.

"I'm comfortable with my decision and I hope it serves me well."

Chris Woakes
Get the latest updates on ICC T20 Worldcup 2022 and CWG 2022 check out the Schedule, Live Score and Medals Tally. Like us on Facebook or follow us on Twitter for more sports updates. You can also download the NDTV Cricket app for Android or iOS.