India vs England, 3rd ODI: Sam Curran Was Incredible, We Are Proud Of Him, Says Jos Buttler

India vs England: Sam Curran smashed an unbeaten knock of 95 but couldn't prevent a defeat for his side in the 3rd ODI, at the MCA Stadium in Pune. 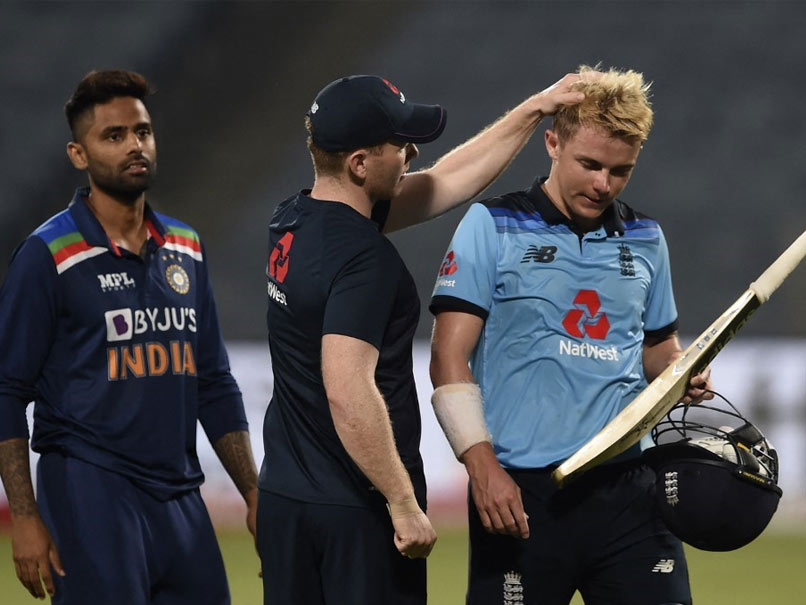 IND vs ENG: Sam Curran after his England's defeat vs India in the third ODI, on Sunday.© AFP

After suffering a seven-run loss in the third and final ODI against India at the Maharashtra Cricket Association Stadium, England's stand-in ODI skipper Jos Buttler on Sunday said that all-rounder Sam Curran played an incredible knock, but the credit goes to hosts for winning the series. Curran played an unbeaten knock of 95 but his knock went in vain as India registered a seven-run win in the third ODI to clinch the three-match series 2-1. At one stage, England was down and out at 200/7, but Curran changed the game around with his brilliant batting. However, T Natarajan defended 14 runs in the final over, and the hosts clinched the series.

"A fantastic game, both sides made some mistakes but played some brilliant cricket as well. We witnessed an incredible knock from Curran to nearly get us over the line, but congratulations to India on winning. We've learnt a lot as a side and seen many guys stand up and take the lead. The white-ball leg was incredibly competitive," Buttler told host broadcaster Star Sports at the post-match presentation.

"These are the conditions we will face in the near future in the World Cup. It's a great experience for the young guys to play a top-class side like India and they will be better cricketers for it. We didn't bowl that well at the top, gave away easy boundaries, but dragged it back only to be pegged back by (Rishabh) Pant and (Hardik) Pandya. We didn't have those big partnerships to take us over the line," he added.

Further talking about the game and knock played by Curran, Buttler said: "We have played excellent cricket for a number of years, the talent pool in white-ball cricket is growing and creates competition in the squad and drives us to do better. We bat deep as a side, it's one of our strengths, but Sam Curran did well to take responsibility and take a lot of the strike and it took a great character to play the way he did. I know he will be disappointed he didn't get us over the line, but we are all very proud of him and his performance."

Earlier, India's batting unit displayed a change of approach in the third ODI and this ensured that despite losing wickets at regular intervals, the hosts posted a total of 329.

Pant (78), Pandya (64), and Shikhar Dhawan (67) registered fifty-plus scores as India set a 330-run target for the visitors. The Virat Kohli-led side then restricted England to 322/9 to win the match and the series.

Jos Buttler India vs England 2020-21 Cricket India vs England, 3rd ODI
Get the latest updates on ICC T20 Worldcup 2022 and CWG 2022 check out the Schedule, Live Score and Medals Tally. Like us on Facebook or follow us on Twitter for more sports updates. You can also download the NDTV Cricket app for Android or iOS.