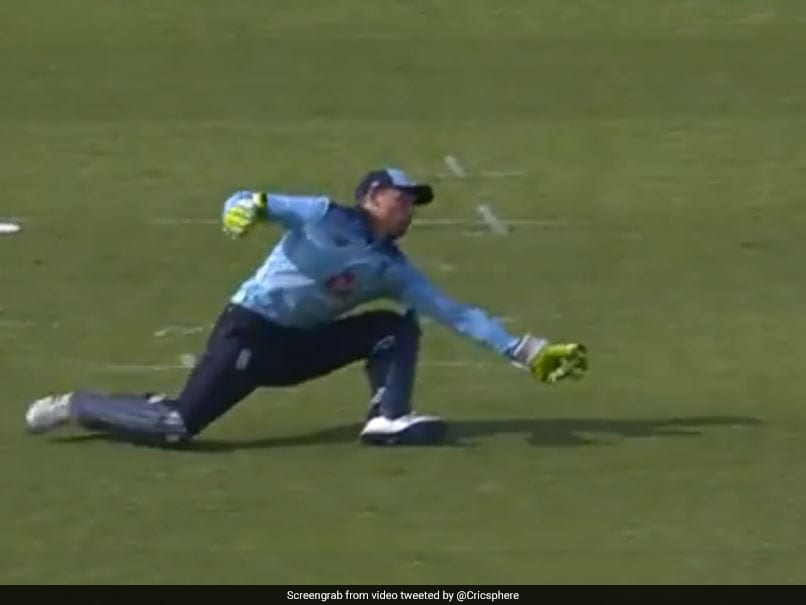 IND vs ENG: Jos Buttler got down to his weaker left side and took a great catch to dismiss Rishabh Pant.© Twitter

Rishabh Pant continued his fine form with the bat and smashed yet another half-century as India set a 330-run target for England in the third ODI on Sunday. Pant top-scored for the hosts scoring 78 off 62 balls, with his knock studded with five fours and four hits over the fence. Just as when he was looking set for his maiden ODI century, a wonderful reflex catch from England skipper Jos Buttler behind the stumps brought Pant's brilliant knock to an end. Sam Curran bowled a full-length delivery just outside off stump and Pant decided to flick it on the leg side, only managing a thick outside edge that went low to the wicket-keeper. Buttler, despite being wrong-footed showed great reflex and pulled off a stunning catch going down to his weaker left side to end the dangerous partnership.

Coming in to bat after India had lost skipper Virat Kohlicheaply, the left-handed batsman batted with great intent and took his chances after a cautious start. After losing last match centurion KL Rahul soon after, he stitched a solid 99-run partnership for the fifth wicket with Hardik Pandya.

As India looked set for another big score while batting first in the series both the players got out in a short span of time allowing the visitors to pull things back in the series decider.

A handy contribution from Krunal Pandya and Shardul Thakur's brisk 21-ball 30 helped India cross 300-mark and post a challenging total for the visitors.

Hardik Pandya India vs England, 3rd ODI
Get the latest updates on Fifa Worldcup 2022 and check out  Fifa World Cup Schedule, Stats and Live Cricket Score. Like us on Facebook or follow us on Twitter for more sports updates. You can also download the NDTV Cricket app for Android or iOS.