It's A New India Under Virat Kohli, One Which Never Gives Up: Sunil Gavaskar 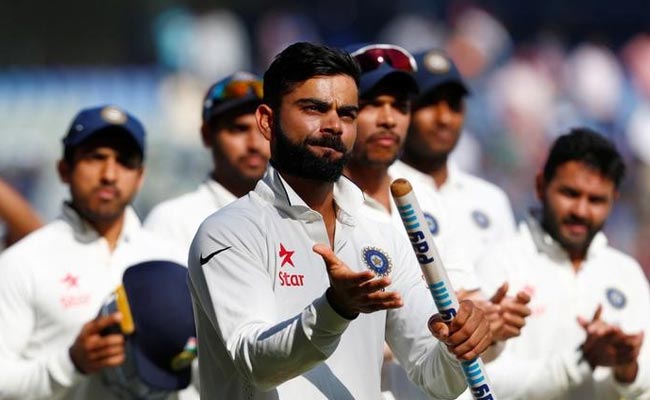 Virat Kohli's Team India has ended an eight-year wait against England. After three straight series defeat, both at home and away, Indians finally defeated the Englishmen, with an emphatic 4-0 margin.

The victory margin might make it seem that the visitors hardly put up a fight. But there were quite a few occasions when England posed some tricky questions to India. And each time a Kohli, or a Jayant Yadav or Ravindra Jadeja or Karun Nair gave them the right reply.

And this attitude of the current Indian Test team has impressed former India captain Sunil Gavaskar.

"This is a new Indian team, one which does not give up. In Chennai, India had kept the England team on field for almost two full days. On the final day as England collapsed it seemed that they were tired. They have been on tour for almost three months now, first in Bangladesh and then India. When tired minds are at play, then chances of loss are more," Gavaskar told NDTV.

Gavaskar also lauded the effort of Jadeja, who picked seven for 48, and also Ravichandran Ashwin, who supported him well.

"Both spinners complemented each other well. While one was not allowing the batsmen runs, the other took wickets. Though Ashwin did not pick a wicket in Chennai, he did not allow the batsmen too many runs. Ashwin had an important role to play in the win," Gavaskar said.

Former India player Aakash Chopra said that the team spirit was high in the current side. "In this team everybody in genuinely happy about each other's success. It reveals character of the team," he said.

Comments
Topics mentioned in this article
Virat Kohli Karun Nair Jayant Yadav India Cricket Team England Cricket Team India vs England 2016 Cricket
Get the latest updates on IPL 2020, check out the IPL Schedule for 2020 and Indian Premier League (IPL) Cricket live score . Like us on Facebook or follow us on Twitter for more sports updates. You can also download the NDTV Cricket app for Android or iOS.