Haseeb Hameed showed his prowess in Mohali by scoring 59 not-out batting at number 8 with his fractured finger. 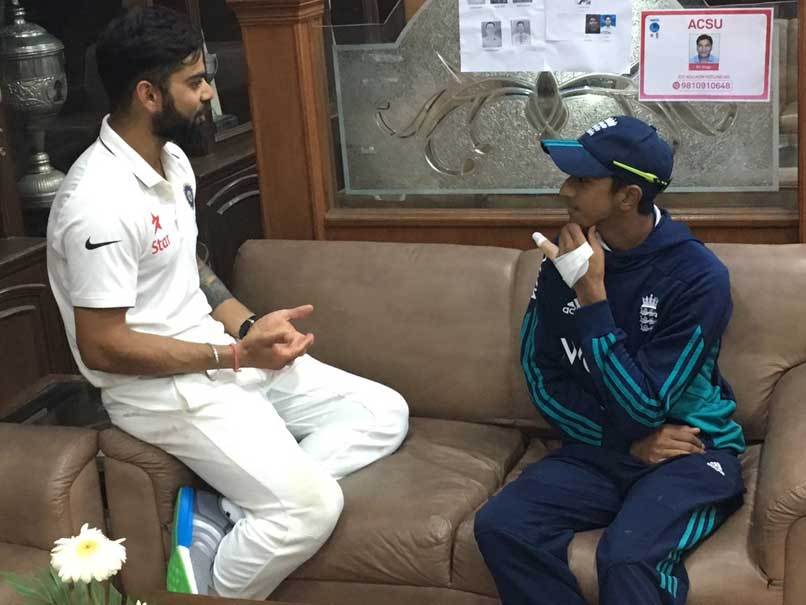 England batsman Haseeb Hameed, who has impressed everyone with his skills, took batting tips from India's Test captain Virat Kohliafter the third Test ended at Mohali on Tuesday.

The teen sensation from Lancashire, who had scored 82 in Rajkot, showed his prowess in Mohali by scoring 59 not-out batting at number 8 with his fractured finger.

The family members of Hameed were also present to cheer for him at the PCA stadium.

BCCI took to Twitter and said: "Inspiring generation next. Young @HaseebHameed97 is all ears to #TeamIndia captain @imVkohli"

Inspiring generation next. Young @HaseebHameed97 is all ears to #TeamIndia captain @imVkohli pic.twitter.com/x1ZFgahwZm

England were reeling at 107 for 6 in the second innings of the Test when Haseeb came out to bat with injury. He stood there for almost 44 overs and played 156 balls for his half-century.

Though, he could not help his team save the Test but his gritty and gutsy innings was widely appreciated.

Virat too lauded his patient knock and looked impressed with the way the youngster shifted gears when he started to run out of partners.

Meanwhile, the 19-year-old has been ruled out of the series and has gone back home for his hand surgery.

Comments
Topics mentioned in this article
India Cricket Team England Cricket Team Haseeb Hameed Virat Kohli Punjab Cricket Association Stadium, Mohali India vs England 2016 Cricket
Get the latest updates on ICC T20 Worldcup 2022 and CWG 2022 check out the Schedule, Live Score and Medals Tally. Like us on Facebook or follow us on Twitter for more sports updates. You can also download the NDTV Cricket app for Android or iOS.