It is double bonanza for the sports enthusiasts in this sleepy city with big-ticket hockey and cricket games scheduled to be held on back-to-back days starting on Friday. 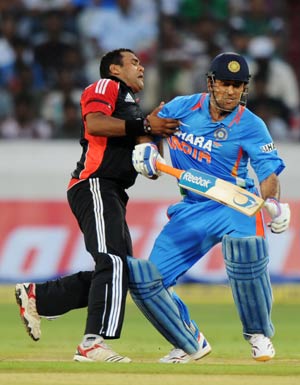 It is double bonanza for the sports enthusiasts in this sleepy city with big-ticket hockey and cricket games scheduled to be held on back-to-back days starting on Friday.

First up, the fans will witness a star-studded Hockey Indian League match between Ranchi Rhinos and Mumbai Magicians on Friday in the Mohrabadi Astroturf Stadium.

The next day, all roads will lead to the newly-constructed JSCA Stadium in Dhurwa where city's favourite son Mahendra Singh Dhoni will lead India against England in the third ODI.

"I'm looking forward to the match 200 per cent," Dhoni had said after the Kochi ODI in which India bounced back to level the five-match series 1-1.

"I think overall it will be very exciting. And also, it gets international recognition to the cities that have international stadiums."

"It's a big thing for me. We had an international stadium, the Keenan Stadium (Jamshedpur) where we played a few games. I think the last game we played was against England (in 2006) where we lost. But it was a beautiful stadium," Dhoni said.

The Indian skipper said having an international stadium has given fame to Ranchi.

"When I came it was difficult to make people understand which place or city I was from, but once we have an international venue, people outside will recognise the city quite easily. It's good for the state and very good for our city," he said.

"It's very important for the local associations to have their own ground. It's a big effort from all the association from the President, the Secretary and all the people involved. I think overall it will be nice. We'll be playing there after a long time. What we have seen in the small venues is they attract a lot of fans, who come and support good cricket," Dhoni added.

The tickets have already been sold out for the ODI and the Stadium will be inaugurated tomorrow in presence of Jharkhand Governor Syed Ahmed. The other dignitaries expected to be present are Gujarat CM and GCA president Narendra Modi and BCCI supremo N Srinivasan among others.

Jharkhand folk artist Nandlal Nayak will perform with his troupe of 179 members.

"120 drummers will reverberate the stadium with their electrifying beats in a truly traditional fashion," Nayak said.

"They will perform under the segment, 'Invoking The Forest' as they would welcome the guests with the drum beats in the 12-minute show.

Comments
Topics mentioned in this article
Cricket India vs England 2012 England Cricket Team India Cricket Team MS Dhoni
Get the latest updates on ICC T20 Worldcup 2022 and CWG 2022 check out the Schedule, Live Score and Medals Tally. Like us on Facebook or follow us on Twitter for more sports updates. You can also download the NDTV Cricket app for Android or iOS.