Fielding at first slip on the first day, Virat Kohli edged one which Trott claimed to have taken cleanly but then the TV replays showed something which all and sundry criticised later on. 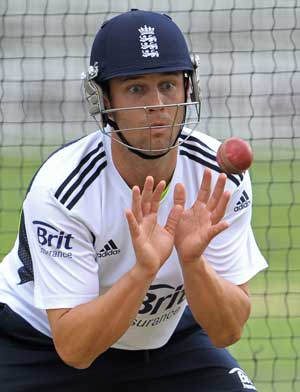 Former India captain Sunil Gavaskar on Friday lashed out at England's Jonathan Trott, saying the player "breached the spirit of cricket" by refusing to acknowledge that he had not cleanly taken a catch on the opening day of the first cricket Test. (File Photo)

Fielding at first slip on the first day, Virat Kohli offered a catch which Trott claimed to have taken cleanly but then the TV replays showed otherwise.

"It was quite clear that the spirit of cricket was breached. I think there should have been a sanction against Trott," Gavaskar said.

Gavaskar recalled a similar incident that had taken place in the past, during a match between England and Pakistan.

"The way he claimed it, I believe that we have seen in the past when there was a Pakistani wicketkeeper who appealed against Ian Botham. That was a similar situation and the English media tore him (Pakistan player) apart.

"I don't know what the English media has written now. I do believe if that particular thing needed a sanction (this should also)," he told NDTV.

Gavaskar further said: "If he (Trott) had said he didn't know what had happened, it would have been a different situation. But he was actually accepting high-fives from the bowler, the fielders and that means he was quite sure that it was a catch."

Post-tea, when India were at 259 for three, Kohli, who was on four, went for a cut shot off Graeme Swann's bowling but edged the ball to Trott at slip.

The ball struck Trott's forearm and he dived backward to complete the catch. He, however, dropped it on the turf but still appealed and forced the on-field umpires to refer the matter to third umpire Sudhir Asnani.

But TV replays clearly showed that the ball spilled out of his hand as he dived backward and his body covered the ball before he scooped it up and appealed.

Gavaskar was full of praise for Cheteshwar Pujara, who has slammed his maiden double century to put India in the driver's seat at close on the second day.

"As long as he is performing, he is going to be an asset to the Indian team. He brings calmness to the middle-order. His temperament will tested when he goes out to bat at the fall of an early wicket when the bowler is fresh. But he has got all the ingredients to have a long career."

Comments
Topics mentioned in this article
Cricket India vs England 2012 Jonathan Trott Sunil Manohar Gavaskar England Cricket Team India Cricket Team
Get the latest Cricket news, check out the India cricket schedule, Cricket live score . Like us on Facebook or follow us on Twitter for more sports updates. You can also download the NDTV Cricket app for Android or iOS.