As India Take On Bangladesh In Day-Night Test, A Look At The History Of Pink-Ball Cricket

Pink-ball Test cricket will make a debut in India when the hosts take on Bangladesh in the first such match at the Eden Gardens in Kolkata from November 22. 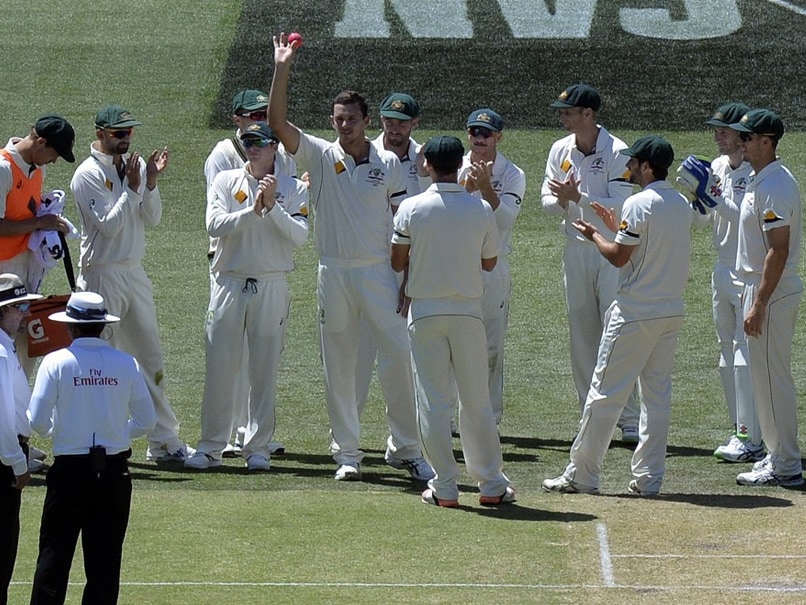 Josh Hazlewood celebrates his 5-wicket haul in the first ever day-night Test played in 2015.© AFP

India and Bangladesh will face off in a historic match starting on November 22 at the Eden Gardens stadium in Kolkata. It will be the first time that either of the two teams will play a day-night Test match. It is also the first ever day-night Test hosted in India. The fact that the match will be a pink-ball affair was decided soon after the newly appointed BCCI President, Sourav Ganguly, took office. Preparations to make the match a special affair are underway, with Army paratroopers slated to fly down from helicopters to hand the balls to the two captains and a huge pink balloon stationed near the stadium until the end of the match.

The world's top ranked team in the longest format, however, are quite late to the party, playing their first pink-ball contest four years after the first Test to be played under lights.

The first ever floodlit Test was played between Australia and New Zealand at the Adelaide Oval in November 2015, with the hosts winning the match by three wickets. Since then, 10 more day-night matches have been played. Australia have the most experience in day-night Tests, playing - and winning - five pink-ball matches.

Australia wanted the Adelaide Test against India last year to be a pink-ball affair, but the Board of Control for Cricket in India (BCCI) had refuted the idea at the time.

While India are late to the day-night Test bandwagon, they held their first first-class match under the lights as early as 1997. The Ranji Trophy final between Delhi and Mumbai was played under the lights in Gwalior. However, the match was played entirely with a white ball.

The first ever day-night first-class match with the pink ball was played in West Indies in the late 2000s between Guyana and Trinidad and Tobago.

The annual curtain-raiser to the English cricket season in 2010 was played under floodlights in Abu Dhabi. A year later, the County Championship saw its first day-night match when Kent faced off against Glamorgan.

In India, the first pink-ball match was the four-day CAB Super League final between Mohun Bagan and Bhowanipore. The Cricket Association of Bengal (CAB) was then helmed by Sourav Ganguly. The match featured the likes of Mohammed Shami and Wriddhiman Saha.

Shami starred in the match, picking up seven wickets as he powered Mohun Bagan to a win.

The 2016 Duleep Trophy was also played under the lights, but since then Indian cricket has seen a hiatus in terms of pink-ball matches.

The second India vs Bangladesh Test will also be the first time that the pink SG balls will be used, with the previous matches all played with the pink Kookaburra.

Eden Gardens Cricket
Get the latest updates on ICC T20 Worldcup 2022, check out the Schedule and Live Score. Like us on Facebook or follow us on Twitter for more sports updates. You can also download the NDTV Cricket app for Android or iOS.