Michael Clarke said that Mahendra Singh Dhoni will not only play the 2019 World Cup but will also be a part of the Indian team that will play in 2023 World Cup. 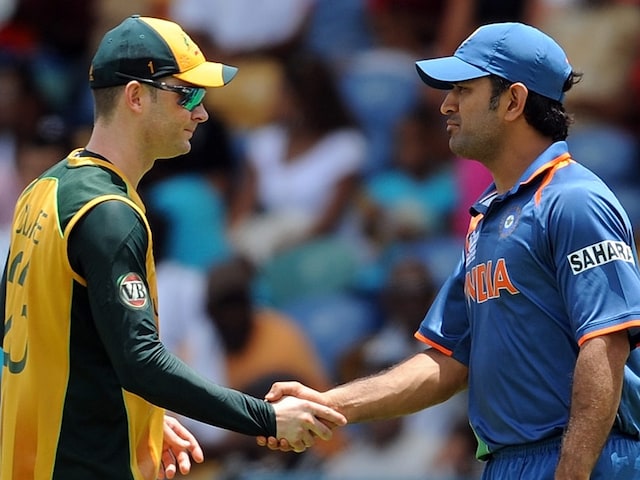 Former Australia captain Michael Clarke, ahead of the second One-Day International (ODI) between India and Australia at the Eden Gardens, said that Mahendra Singh Dhoni will not only play the 2019 World Cup but will also be a part of the Indian team that will play in 2023 World Cup. "Don't ask me whether he will play in the 2019 World Cup. He will play in 2023," Clarke said with a smile. Dhoni's 79-run knock helped get India out of a massive trouble as they had lost the top batting order cheaply in the first ODI against Australia.

The former Australian batsman also praised the Indian chinaman, Kuldeep Yadav, "He is an attacking bowler. His control as a wrist spinner from the back of his hand is amazing as is his strength. He has got all the skills, spins both ways, bowls long spells. He did well in the Test series," Clarke said.

When India toured Sri Lanka earlier in the month and crushed them 9-0 across all formats, head coach Ravi Shastri had firmly mentioned that Dhoni is not even "half finished yet" and is very much in the scheme of things for the 2019 World Cup in England.

"MS Dhoni is a massive influence on the team. He is a living legend in the dressing room and an ornament to the game. By no means or by any stretch of imagination he is finished or even half finished yet."

"If anyone thinks so, they are mistaken and they have another one coming. There are in for some surprises. The old dog has plenty to offer."

Shastri had also asserted that Dhoni is completely fit and is in good form. "Where else will you find a legend like MS Dhoni? Dhoni is in the same league as Sunil Gavaskar, Sachin Tendulkar or Kapil Dev. We have to respect his achievements," Shastri had told a TV channel.

India is slated to play the second ODI against Australia on September 21 at the Eden Gardens but the weather might play a spoilsport as the ground is undercover for the past two days.

(with inputs from agencies)

Comments
Topics mentioned in this article
India Cricket Team Australia Cricket Team MS Dhoni Michael Clarke India vs Australia 2017 Cricket
Get the latest Cricket news, check out the India cricket schedule, Cricket live score . Like us on Facebook or follow us on Twitter for more sports updates. You can also download the NDTV Cricket app for Android or iOS.