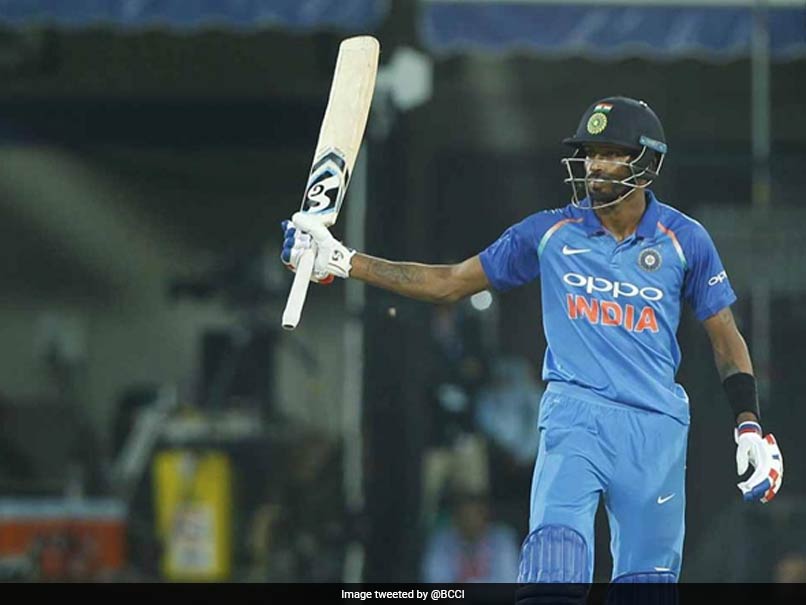 A brilliant all-round performance by the Indian team helped them clinch the five-match ODI series 3-0against Australia on Sunday. Virat Kohli and team restricted Australia to 293/6 after a superb comeback by the bowlers in the death overs. In reply, India opener Rohit Sharma (71) and Ajinkya Rahane (70) gave hosts a solid start in run-chase as they stitched together a 100 plus-run partnership. Australia, however, fought back with couple of quick wickets but Hardik Pandya (78), who was promoted to No.4 position, had other plans as he powered the Men in Blue to a five-wicket victory.

Chasing 294 for a win, India overhauled the target with 13 balls to spare in front of a packed Holkar stadium to take a series-clinching 3-0 lead.

Openers Rohit Sharma (71) and Ajinkya Rahane (70) set the platform for the win with their 131-run partnership while Pandya steered the side to victory with his crucial knock, which came off 72 balls.

Australia opener Aaron Finch's fluent century came to a nought due to self-destructive batting by Australia in the last 10 overs.

Finch, playing his first game of the series, had placed Australia at a commanding 232 for two in 40 overs with his 124-run innings but they lost plot after that.

When they could have gone for a kill and a score in the vicinity of 350, all Australia could manage was just 59 runs and lost four wickets to settle for 293 for six.

India faced a few anxious moments in their run chase after losing the set openers along with captain Virat Kohli (28) and Kedar Jadhav (2) but Pandya, who had played crucial role in India's win in the series-opener in Chennai, ensured there were no more hiccups.

He kept Australia under pressure with his confident batting as he not only rotated the strike comfortably but also smacked four sixes off Ashton Agar to keep the run-rate under control.

Pandya found a good partner in Manish Pandey (36) as they went about their business calmly and shared a 78-run stand for the fifth wicket.

The win meant that India have maintained their unbeaten run in Indore and have now recorded sixth consecutive ODI series win since June 2016.

India, already number one in the Test format, replaced South Africa at the top of ODI ranking table by taking their tally to 120 points, one more than the Proteas.

Rohit subdued Australia with his punishing knock on a flat track, which had nothing for the bowlers. His knock was studded with six fours and four sixes.

Hitting sixes was no big deal for Rohit, who smashed the Australian pace trio of Pat Cummins, Nathan Coulter-Nile and Kane Richardson with equal ease.

He raised his fifty with a six off left-arm spinner Agar. Rahane kept rotating strike and also hit Marcus Stoinis for three boundaries in a single over.

Rohit was dropped on 67 by stumper Peter Handscomb off Cummins but could not make full use of the chance and soon miscued one from Coulter-Nile to be caught by Hilton Cartwright at deep mid-wicket.

Cummins ended Rahane's innings by trapping him LBW to bring two new batsmen -- skipper Kohli and Pandya -- on the crease.

India were cruising at that stage but quick dismissals of Kohli and Jadhav infused some life into the match. Earlier, exploiting a flat Holkar track, Finch added 70 runs for the opening wicket with David Warner (42) and raised a 154-run partnership with captain Steve Smith (63) for the second wicket.

Indian bowlers, who were largely ineffective till the dismissal of Finch, began to dictate terms towards the end. Smith and Glenn Maxwell (5) frittered away a brilliant opportunity to keep the series alive.

Making an instant impact in his first game of the series, Finch responded to the SOS call from the visitors with a class knock after skipper Smith won the toss and elected to bat.

Finch, who replaced young Hilton Cartright after recovering from a calf injury, decorated his eighth ODI century with 12 fours and five sixes.

His footwork was impeccable and he rendered the stock balls of both the spinners ineffective, hitting four of his five sixes on 'googlies'.

Finch's dominance against Kuldeep was clear from the fact that he creamed off 41 runs from 26 balls he faced from the Chinaman.

However, the hosts staged a remarkable comeback in the last 10 overs of the game. It all started in the last ball of the 38th over when Finch lofted Kuldeep to Kedar Jadhav at deep-midwicket.

Yadav saw the back of Smith, caught at long-off, while Chahal had Maxwell stumped.

Bumrah got rid of Travis Head (4) and Peter Handscomb (3), leaving Australia in tatters. They could never get the fillip, which was there for them to take after a stupendous start even as Marcus Stoinis took the side close to 300-run mark with his unbeaten 27.