Tamim Iqbal smashed 103 not out 63 balls to help Bangladesh post 180 for two. Rain interrupted Oman's innings twice and they were finally set a target of 120 in 12 overs but could only manage 65 for nine. 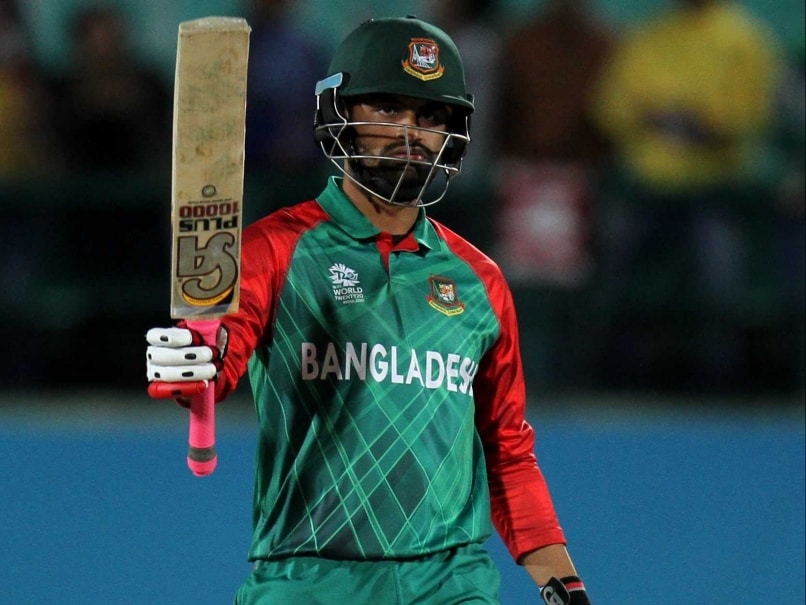 Tamim Iqbal became the the first Bangladesh cricketer to score a century in all three formats of the game.© AFP
Dharamsala:

Tamim Iqbal became the first cricketer from Bangladesh to score a century in the Twenty20 format as he led his side to the World T20 Super 10s with a 54-run win over Oman via Duckworth-Lewis method in a rain-hit Group A match on Sunday. (Netherlands Register Consolation Win Against Ireland)

Left-handed opener Iqbal's unbeaten 103 was packed with 10 fours and five sixes and he single-handedly led the Asia Cup finalists to a challenging 180 for two. (Windies Ride on Darren Sammy's Fifty to Stun Australia in Warm-Up)

Iqbal is the only Bangladeshi player, who has managed a century in all three formats of the game.

Oman's chase was shaky from the beginning and two rain suspensions only made the matter worse.

They were 41 for two in seven overs when rain forced play to stop for about 45 minutes. At resumption, they were set a new target of 152 off 16 overs but only eight balls were bowled and the skies opened up again.

Oman were then set a revised target of 120 from 12 overs which meant that they had to score 75 runs from 22 balls but all they managed was 65 for nine.

Jatinder Singh (25) was the top-scorer for Oman while other batsmen failed miserably. Adnan Ilyas (13) was the only other batsman who managed a double-digit score. Shakib-Al-Hasan (4/15) claimed four wickets with his left-arm spin.

Bangladesh have now joined India, Pakistan, New Zealand and Australia in the 'Group of death'. They face Pakistan in their first main draw match on March 16 in Kolkata.

After a few watchful overs and losing his opening partner Saumya Sarkar (12), Iqbal combined with Sabbir Rahman (44) to punish the Oman bowlers. They added 97 runs in just 9.1 overs.

Left-arm pacer Bilal Khan tested Bangladesh batsmen with his pace and accuracy, though, early in the innings. He gave away only five runs in his first two overs and four of those were result of a mis-field.

Not only pace but the spin duo of 37-year-old Amir Ali and Ajay Lalcheta also troubled Bangladesh openers.

As a result, Bangladesh managed under five runs an over in the powerplay segment. Iqbal broke the shackles with a four and six off Lalcheta but the bowler got success immediately by dismissing struggling Sarkar, who charged down the wicket, missed the line and lost his leg stump.

Bangladesh, though, motored after that with Iqbal and Sabbir Rahman ripping apart the inexperienced Oman bowlers, striking the ball comfortably and hard.

Sabbir supported Iqbal well scoring 44 off just 26, an innings that included with five fours and six.

Comments
Topics mentioned in this article
Bangladesh Cricket Team Oman Tamim Iqbal Shakib Al Hasan World T20, 2016 Cricket
Get the latest updates on T20 World Cup, check out the T20 World Cup Schedule and Live Score . Like us on Facebook or follow us on Twitter for more sports updates. You can also download the NDTV Cricket app for Android or iOS.