Ish Sodhi said while Daniel Vettori is more of a finger spinner, Mitchell Santner uses his wrists well while bowling.

Left-arm spinner Mitchell Santner has emerged as New Zealand's trump card in the ongoing World Twenty20 but his bowling partner Ish Sodhi said it is not fair to compare him to the talismanic Daniel Vettori as both are completely different despite similar styles. (World T20: Flawless New Zealand Bid to Compound Bangladesh Misery)

Santner has grabbed eight wickets in three matches so far and has played a key role in New Zealand's smooth unbeaten march into the semi-finals.

"He (Vettori) was a fantastic bowler in his own right. But I think they are completely different bowlers. Santner is being himself as much as he can at the moment and it's working really well for him. For us to have his voice when we need it is really nice," Santner told reporters on the eve of the team's match against Bangladesh here.

Decoding the secret of Santner's success, Sodhi said the left-arm spinner's ability to use his wrist well makes him a difficult proposition in the spin-friendly Indian conditions.

"He's a finger spinner but he puts a lot of wrist like leg-spin bowling. He puts lot of wrists on the ball. You have to do that with our conditions as it's not very conducive to spin, so you have to get something out of the wicket. I think he's a product of that.Â (WT20: Kiwis Rule The Spinning Tracks as Hard Times For Lanka Continue)

"Over here, it becomes even harder to play when he puts a lot of wrists to the ball. It's probably a product of where we grew up. It has put us in good stead over here," Sodhi said. 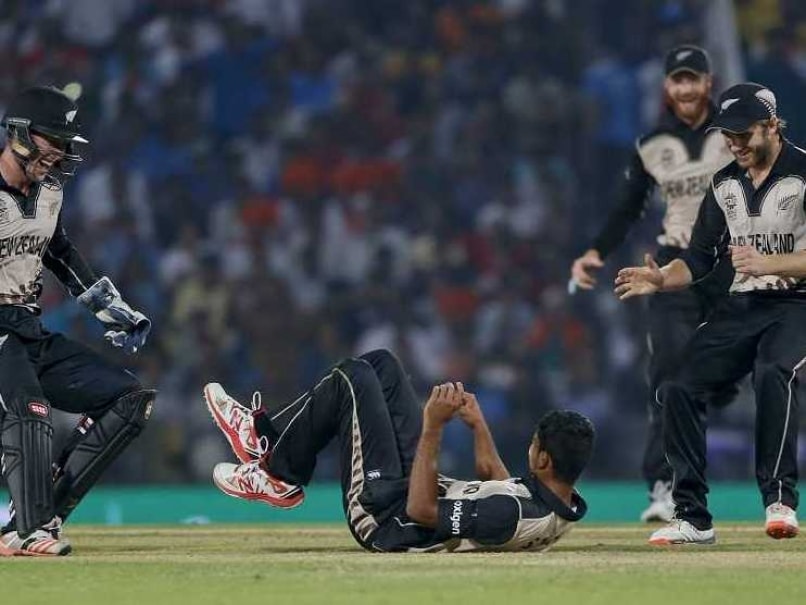 New Zealand's Ish Sodhi (down) celebrates with teammates after picking up a wicket during the World T20 match against India.

Talking of conditions, Sodhi conceded he did not expect the wickets to be so spin-friendly.

"To be completely honest, I did not expect it to turn as much it has. It has been a pretty decent batting surface so far. We had to adapt and I think we have done pretty well so far," he said.

Sodhi and Santner have 13 wickets between them in the ongoing tournament.

"We played a lot of domestic cricket so far for Northern Districts, played some crucial role for T20 and one-day cricket. To be able to do this at this level is really very pleasing. To have a good partner at the other end supports me really well."

The Kiwis may have entered the final four with wins over India, Australia and Pakistan but they're not taking winless Bangladeshis lightly in their last Group 2 league match.

"I don't think anyone would take them lightly. We have to start again and adapt to the conditions. We have to keep the things relatively similar to what we have been doing. The opposition is completely different to the ones we have faced so far.

"We have to treat it like any other game and play the same way that we have been doing. We have to adapt to the conditions," Sodhi said.

Citing Bangladesh's narrow one-run loss to India, Sodhi said, "To take the game to that close in a game against India, was remarkable. Most of the time when we played them in these conditions, they've been really good opposition. The last game was a highlight of how strong they can be in these condition."

"We have to find a formula to win. It's different to the one in the last game because the conditions are totally different."

Asked about the pitch, he said: "It turned quite a bit in the India-Pakistan game... I've not seen this wicket so far. But it looks pretty different as it has not been under covers for long. We have no idea what to expect. We will figure that out once we get the ball."