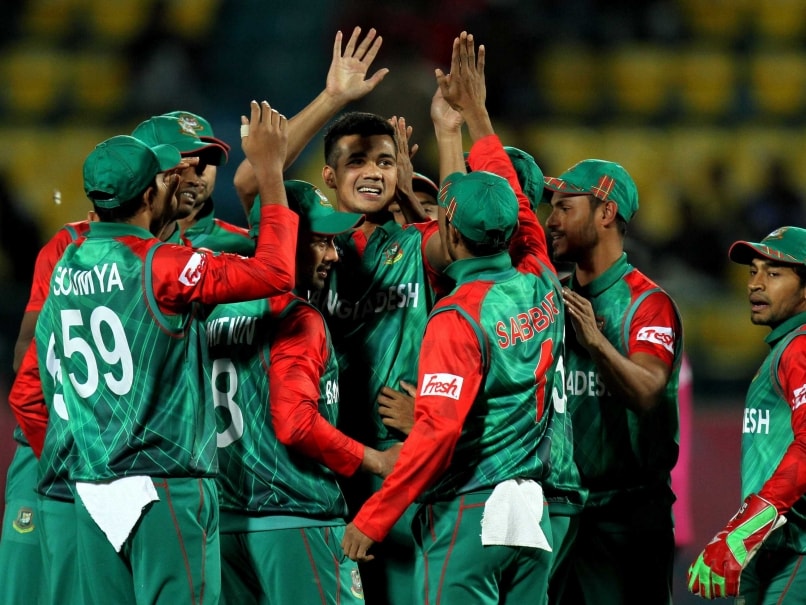 Taskin Ahmed, Arafat Sunny bans came as a blow to Bangladesh's chances in the World T20 after they lost to Pakistan in their opening match.© AFP
Bengaluru:

Australian captain Steven Smith said they are not taking Bangladesh lightly despite the absence of Taskin Ahmed and Aarafat Sunny in their ICC World T20 match here on Monday. (Australia vs Bangladesh Preview)

"They have still got some quality bowlers in their line-up (even in the absence of Taskin and Sunny suspended by ICC). We don't take any side lightly," Smith told reporters on the eve of the game to be played at Chinnaswamy stadium.

"It is going to be tough because Bangladesh are a much-improved side, and have some match-winners in their line-up. We have to be at our best if we want to beat them tomorrow night," Smith added. (Fans Vent Anger at ICC)

"They have learnt a lot under Chandika Hathurusinghe, and they will be a big challenge," he said.

On Australia's chances of qualifying for semifinals, Smith said after the loss against New Zealand they are keen on getting the winning touch back.

"It is a tough group, there are some very good sides in our group. Obviously we didn't start as well as we would have liked the other night against New Zealand. It is in the past now. We need to win every game we play if we want to win the World Cup," he said.

Replying to a query about dropping Josh Hazlewood, Smith said he would be an option in Monday's match if the grass stays on the pitch.

"I am not too sure. It's the selectors' job to pick the side. That's certainly an option if the grass stays on the wicket a little bit. We will wait and see how it goes tomorrow," he said.

Smith said the pitch looks decent and would not turn as much as it did in last couple of matches.

"There's a little grass in it. It's still quite wet at this stage, but it's pretty hot here, so it dries out pretty quickly. So, looking at how dry it is and that kind of thing, I don't think this will take as much turn as the last couple that we have seen. It looks a pretty good wicket," he said.

Asked about the schedule, Smith said it is part of the game and that the team is least worried about it.

Smith further hoped that the team plays better than the previous match against New Zealand to turn things around.

"We have played a lot of cricket recently and we are all in good form. So, hopefully, we can play a little bit better than we did the other night and win here. It's a must-win game for us and hopefully we can turn it around quickly tomorrow," he said.

Comments
Topics mentioned in this article
Taskin Ahmed Arafat Sunny Steven Smith Australia Cricket Team Bangladesh Cricket Team World T20, 2016 Cricket
Get the latest updates on IPL Auction 2023 and check out  IPL 2023 and Live Cricket Score. Like us on Facebook or follow us on Twitter for more sports updates. You can also download the NDTV Cricket app for Android or iOS.