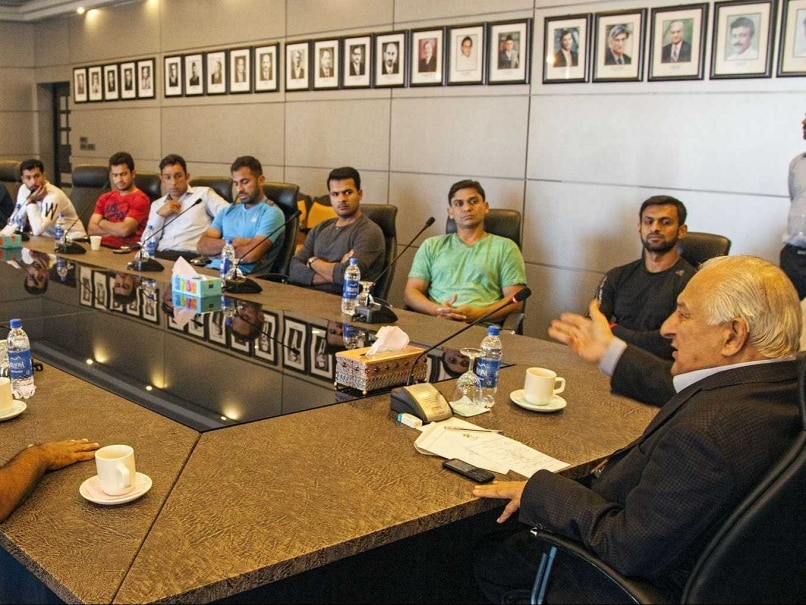 Pakistan Cricket Board chief Shahryar Khan during a meeting with the cricket team on Thursday. (Image credit: PCB)
Islamabad/New Delhi:

Pakistan's participation in the ICC World T20 continued to be shrouded in suspense with the government refusing to clear the team's departure unless India provides written assurance of security. (ICC World Twenty20: Team Afridi Left in The Lurch as Pakistan Shadowbox With India Over Security)

"We are not in a position to give clearance right now. The threats are Pakistan specific. It is our responsibility that our players do not face any kind of pressure when they play... Unless we get written assurance from the (Indian) government, we will not allow our team to travel to India," Chaudhry Nisar Ali Khan, Pakistan's interior minister said. (Dharamsala Loses India vs Pakistan ICC World T20 Match to Kolkata)

"How can cricket be played amid threats... Eden Gardens has a capacity of one lakh, what if stone comes from any side. We are just demanding an even playing field," he added, referring to the marquee clash against India on March 19, which was shifted from Dharamsala to Kolkata due to security concerns. (Sourav Ganguly Says Kolkata Ready to Host India vs Pakistan T20 World Cup Match)

Amid the continuing logjam, the Indian government said all necessary arrangements are always made for major sporting events, citing the recent South Asian Games which were held without a hitch in Assam last month.

"I would like to draw your attention to the fact that all necessary arrangements, including those for security have been made in the past for all international sporting events organised in India," Vikas Swaroop, Ministry of External Affairs spokesperson, said on Thursday.

"Recently as you are aware, the South Asian Federation Games saw good and enthusiastic participation of all contingents from all SAF countries, including Pakistan. We are confident that the ICC World T20 will also be a resounding success in all aspects."

The ICC has already stated that the onus is on Pakistan to send the team since their apprehensions have been addressed.

Comments
Topics mentioned in this article
Pakistan Cricket Board Pakistan Cricket Team India Cricket Team World T20, 2016 Cricket
Get the latest updates on ICC T20 Worldcup 2022 and CWG 2022 check out the Schedule, Live Score and Medals Tally. Like us on Facebook or follow us on Twitter for more sports updates. You can also download the NDTV Cricket app for Android or iOS.